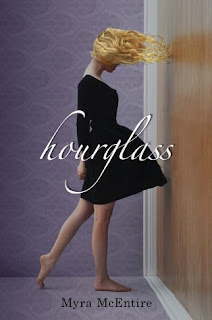 One hour to rewrite the past...

For seventeen-year old Emerson Cole, life is about what isn't there: swooning Southern Belles; soldiers long forgotten; a haunting jazz trio that vanishes in an instant. Plagued by phantoms since her parent's death, she just wants the apparitions to stop so she can be normal. She's tried everything, but the visions keep coming back. So when her well-meaning brother brings in a consultant from a secretive organization called the Hourglass, Emerson's willing to try one last cure. But meeting Michael Weaver may not only change her future, it may change her past.

Who is this dark, mysterious, sympathetic guy, barely older than Emerson herself, who seems to believe every crazy word she says? Why does an electric charge seem to run through the room whenever he's around? And why is he so insistent that he needs her to help to prevent the death that never should have happened?


I thought this book was awesome! I found myself staying up well past my bedtime even though I had work in the morning just to finish a chapter, which would then turn into another chapter, then another, and another... (Well you get the picture.) I loved the whole concept of time travel and how it was portrayed in this book. Emerson can see "rips" which are people from the past that disappear when touched. I liked how these rips were triggered by the environment that Emerson was in, so buildings ripe with historical significance triggered more extravagant or more frequent rips.

One of the things I wasn't crazy about in this book was how obsessed Emerson was with Michael. As soon as she laid eyes on him for the first time he became all she could think about. This was true even in life or death situations! I'm sorry but when I'm in what I believe could be the last few seconds of my life, I would not be thinking about a guys muscles, or his perfect lips. I would be thinking about more important things. Like oh I don't know.... SURVIVING!! This was just one of the many issues I had with Emerson & Michael's often complicated relationship.

All things considered I still loved this book! It sucked me in from the very beginning and was evenly paces so that I never wanted to put it down. The end wrapped things up quit nicely, considering, there is going to be a sequel. So fear not! No major cliffhangers here. Which is good since the next book isn't slated for release until Summer 2012.
Posted by Born Bookish at 5:48 PM