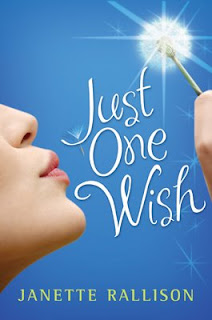 Seventeen-year-old Annika Truman knows about the power of positive thinking. With a little brother who has cancer, it’s all she ever hears about. And in order to help Jeremy, she will go to the ends of the earth ( or at least as far as Hollywood) to help him believe he can survive his upcoming surgery.

But Annika’s plan to convince Jeremy that a magic genie will grant him any wish throws her a curveball when he unexpectedly wished that his television idol would visit him. Annika suddenly finds herself in the desperate predicament of getting access to a hunky star actor and convincing him to come home with her. Piece of cake, right?

As soon as I started reading this book I knew I wouldn’t be able to put it down until I was finished. I picked it up with only a few hours before one of my favorite T.V. show (So You Think You Can Dance.) When the show started I put the book down (pointless). I watched all of about 5 minutes before I picked it back up and read straight through the show and into the night.

This book was very emotional. I laughed my head off, I had tears build up in my eyes, and then I full fledge bawled my eyes out. However, if I had to describe this book to you I would still consider it as a very light, funny, heartwarming book. The author dealt with some very heavy subjects like: childhood cancer, death, and faith, in such a light but touching way.

I loved the family relationships in this book. Annika loves her little brother, Jeremy, more than anything in the world and would do anything for him: like waking up at the crack of dawn, waiting in crazy lines, and outrunning a very large, very angry man all to get her brother the new Robin Hood action figure, and then driving to Hollywood to find the real Robin Hood (well the actor that plays him on T.V.) She might break some rules along the way but hey, its for a good cause right?

The only thing I didn’t love about this book was the romance aspect between Annika and Steve (a.k.a. Robin Hood) I pretty much rolled my eyes during these parts, which I found to be cheesy and totally unrealistic.
Posted by Born Bookish at 1:58 PM