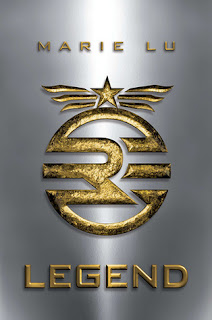 What was once the western United States is now home to the Republic, a nation perpetually at war with its neighbors. Born into an elite family in one of the Republic's wealthiest districts, fifteen-year-old June is a prodigy being groomed for success in the Republic's highest military circles. Born into the slums, fifteen-year-old Day is the countries most wanted criminal. But his motives may not be as malicious as they seem.

From very different worlds, June and Day have no reason to cross paths - until the day June's brother, Metias, is murdered and Day becomes the prime suspect. Caught in the ultimate game of cat and mouse, Day is in a race for his family's survival, while June seeks to avenge Metias' death. But in a shocking turn of events, the two uncover the truth of what has really brought them together, and the sinister lengths their country will go to keep its secrets.

Full of nonstop action, suspense, and romance, this novel is sure to move readers as much as it thrills.

With its eye-catching cover and comparison to the epic Hunger Games series I knew this one was a must read. Although it ended up having nothing in common with the Hunger Games besides the cover design and dystopian setting, it was still an enjoyable and action packed read.

The story was action packed and well paced so that you were always on the edge of your seat. There are some big surprises throughout, some I saw coming others I did not.

The book is broken into two sections; the first half focuses more on Day and the second half on June.  Within each of those halves the chapters alternate between his and her point of view. One of the ways you can tell this is because in Day’s chapters the text is gold, which I found to be a unique and fun way of marking the switch.

As for the two main characters, Day & June, I absolutely loved Day’s character and thought he was wise beyond his years while June was rather annoying and naive.

Day had one of the biggest hearts ever! Even when he was surrounded by danger he was always thinking and worrying about the safety of his family or friends and not himself. He risked his life for those he loved over and over.

To me the romance was not one to ooh and ahh over. I felt the characters were too young, and honestly I didn’t see their connection at all. How Day could ever love June after everything she did to him, I’ll never understand.

There was one major downfall to this book for me and that was the violence. There was a lot of capturing and torturing of prisoners described in too much detail for my liking. This especially angered me because the characters were so young, and the fact that a fifteen year old is ordering for someone else’s body part to be removed made me sick.

The ending did good to wrap up all impending action while leaving enough unfinished for the next installment.
Posted by Born Bookish at 6:12 PM