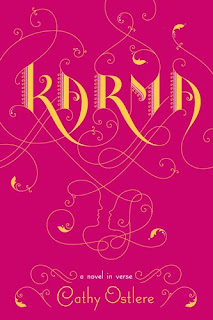 It is 1984, and fifteen-year-old Maya is on her way to India with her father. She carries with her the ashes of her mother, who has recently committed suicide, and arrives in Delhi on the eve of Prime Minister Indira Gandhi's assassination - one of the bloodiest riots in the country's history.

Then Maya is separated from her father and must rely upon the help of a mysterious, kindhearted boy, Sandeep, to safely reunite them. But as her love for Sandeep begins to blossom, Maya will have to face the truth about her painful adolescence . . . if she's ever to imagine her future.

Karma is definitely the most complex and thought provoking novel-in-verse I’ve read to date.

Set in 1984 the story starts in Canada but the majority of it takes place in India. The story focuses on fifteen-year-old Maya who is half Hindu, half Sikh. Her parents wed against both families’ wishes and both of their beliefs.

After Maya’s mother commits suicide, her and her father travel to India to spread her ashes. While there, terror rocks the nation when the Prime Minister is murdered and all chaos breaks loose. Sikhs are now being hunted down and brutally murdered.

Caught up in the middle of this bloody massacre, Maya’s father abandon’s her to find help. Scared and alone, Maya is forced to try and survive on her own, find her father, and make it back home.

Cathy’s use of free verse and poetic way with words made for a beautifully told story, with descriptions that could take your breath away. I found myself tucking little scraps of paper into pages as I read marking my favorite passages.

“The pilot steers along ribbons of light. Green
polar flames rippling in the dark. Long silken
scarves floating on the air. It’s like watching the
wind on fire. Pulsing.”

“I stand up. Stretch my arms out wide to the
empty horizon. Do not be afraid of limitless
possibilities. The desert is infinite to the eye
as love is to the heart.”

“The dream-sky is perfect black. The moon in shadow like a
shy girl hiding behind her mother’s skirt. Yet the
atmosphere hums. Then pulses with light. The pilot
strings the stars together with green ribbons.”

The story is told from the perspectives of three different personal journals; Maya’s diary, Sandeep’s notebook, and Jiva’s journal.

The thing that bothered me most was that many of the characters had multiple names, which got confusing at times. I’m not sure if one was the name and one was the word for mother or father? I’m not really sure, all I know is it was confusing.

The other thing that threw me off at times was the use of different fonts and italics to indicate conversation and dialog, leaving me unsure if some things were being spoken or just thought.

While the first half of the book flew by as the momentum built, the story really started to slow down in the second half and you could really feel those last 250 pages.

Objectionable content warning: There are a number of instances with upsetting and brutal violence that would be too much for young readers.
Posted by Born Bookish at 6:00 AM