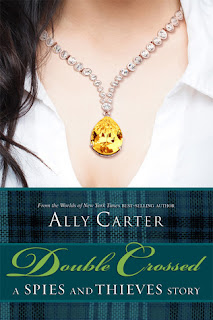 W.W. Hale V—Heir to an American dynasty or master thief?

There are two sides to every coin. Whether these two can work together is a tossup.

Born into privilege, Macey and Hale are experts at mingling with the upper class. But even if they’ve never raised an eyebrow at the glitz, neither teenager has ever felt at home with the glamour.

When Macey and Hale meet at a society gala, the party takes a dangerous turn. Suddenly they’re at the center of a hostage situation, and it’s up to them to stop the thugs from becoming hostile. Will Macey’s spy skills and Hale’s con-man ways be enough to outsmart a ruthless gang? Or will they have to seek out the ultimate inside girl to help?

The worlds of Heist Society and the Gallagher Girls collide in Ally Carter’s fast-paced, high-stakes and tantalizing new story. Get a behind the scenes glimpse as Ally delivers an irresistible thriller that is full of her signature style and savvy twists.

Characters from two of my favorite series; Heist Society and The Gallagher Girls by Ally Carter come together in this fast-paced, action-packed, cross over story.

Macey McHenry (Gallagher Girls) and W.W. Hale V (Heist Society) catch each other’s eye at a high-class charity ball. They keep an eye on each other with a sense the other is hiding something. They engage in some witty banter, and end up working together when the charity ball is under attack and everyone is taken hostage.

AHHHHHH! This story was SO good! It made me remember how much I LOVE both of these series and characters. My only complaint was that it was only 60 pages, and that just wasn’t enough. I wanted more! I hope Ally Carter writes more of these cross over stories because it was brilliant!