YA Review: This is W.A.R by Lisa & Laura Roecker 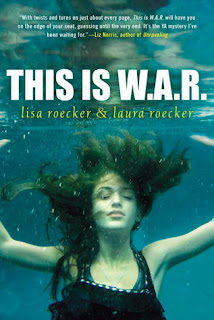 This is W.A.R. begins with a victim who can no longer speak for herself, and whose murder blossoms into a call-to-arms. Enter four very different girls, four very different motives to avenge Willa Ames-Rowan, and only one rule to start: Destroy James Gregory and his family at any cost. Willa's initials spell the secret rallying cry that spurs the foursome to pool their considerable resources and deliver their particular brand of vigilante justice. Innocence is lost, battles are won—and the pursuit of the truth ultimately threatens to destroy them all.

The main reason I wanted to read this book was because I really enjoyed the Roecker's first book, The Liar Society. (They also write really hilarious blog posts, just FYI). I knew very little about the story but thought I would enjoy anything the two wrote. Unfortunately, I was wrong.

The story begins with Willa's thoughts on death right before she drowns. The book is then divided into five parts, each told from the perspective of one of Willa's friends who have banned together to take down her killer.

The Setting-  Hawthorne Lake Country Club, a place where the rich can basically do whatever they want to whomever they want, no questions asked, no consequences. This was the first thing that bothered me. Money is not everything. You can't just throw money at people to make things go away. Especially when that "thing" is murder. The fact that all the characters were so easily paid off to keep quiet was beyond frustrating. Does no one at this club have any morals? Apparently not.

The Characters-  The story is broken up into five parts each focusing on a different one of Willa's friends, their secrets, and memories of the night she died. Neither Rose, Lina, Sloane or Madge were likable characters. They were all spoiled rich brats, disillusioned about the real world and very stereotypical. The worst was Sloane a.k.a. "the dumb one" whom often got annoyed with herself for being so dumb. Her part was definitely the hardest to tolerate. None of the girls had any self respect, which was hard to take.

There isn't even a strong enough word to describe my disgust of the Gregory brothers, who were basically club royalty. Alcoholic, drug dealer, rapist, murderer, all of these words apply to at least one of the Gregory boys. Trip Gregory treated girls like objects, drugging them to "relax" them (practically knock them unconscious) and have sex. I wanted to vomit!! The thing is, most of the girls were dumb enough that they took the pill no questions asked! Seriously?!?

I feel bad writing such a negative review, but I honestly didn't enjoy a single aspect of this story. If the points mentioned above don't make you want rip your hair out or throw up then go ahead and give it a try.  I'm sure some people will like it. I'm also sure a lot of people won't.
Posted by Born Bookish at 2:21 PM