YA Review & Giveaway: The Infinite Moment of Us by Lauren Myracle 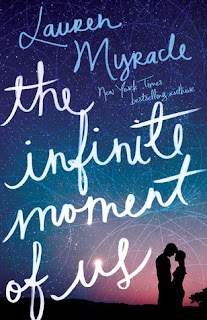 I think this one is being marketed as young adult but it seemed very much new adult in my opinion. The main characters Wren & Charlie both graduate from highschool within the first few pages, the rest of the book takes place over that summer as they try and decide what to do with their futures. Should they go to college? Take a year off? Do charity work?

The story was told through dual perspective of  main characters Wren and Charlie. Neither voice resonated with me, even though it was first person, I never really felt I knew either of them very well. Wren had a very weak personality. She was pretty much a people pleasing pushover who did and said whatever she thought people wanted her to do or say. Charlie's character wasn't as weak but I didn't like him any better. He always seemed to be stuck in the past, unable to leave it behind.

I'm the type who likes a sweet romance that is slowly built and has you on the edge of your seat waiting for that first kiss. The romance in this story was quite the opposite. While Charlie  had a crush on Wren for many years, she just took notice of him and then it all moved very fast, as the two felt "connected" from the start. The sex scenes were for mature readers only, having more detail than any of the New Adult titles I've read.

The ending was not what I was expecting nor was it satisfying. Overall, this was a complete miss for me.

Want to win a copy of The Infinite Moment of Us?

a Rafflecopter giveaway
Posted by Born Bookish at 7:18 AM