YA Review: The Hallowed Ones by Laura Bickle 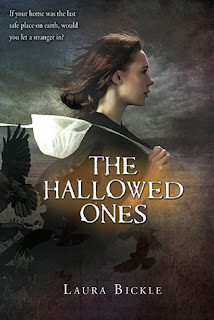 If your home was the last safe place on earth, would you let a stranger in?

In this captivating thriller, an Amish settlement is the last safe haven in a world plagued by an unspeakable horror…

Katie is on the verge of her Rumspringa, the time in Amish life when teenagers are free to experience non-Amish culture before officially joining the church. But before Rumspringa arrives, Katie’s safe world starts to crumble. It begins with a fiery helicopter crash in the cornfields, followed by rumors of massive unrest and the disappearance of huge numbers of people all over the world. Something is out there...and it is making a killing.

Unsure why they haven’t yet been attacked, the Amish Elders make a decree: No one goes outside their community, and no one is allowed in. But when Katie finds a gravely injured young man lying just outside the boundary of their land, she can’t leave him to die. She refuses to submit to the Elder’s rule and secretly brings the stranger into her community—but what else is she bringing in with him?

I have so many feelings raging inside me on this one! It was suspenseful, it was terrifying, it was gruesome, it was hopeful, it was... truly unique! I knew little about the plot going in except it was about an Amish girl and possibly the end of the world.

The story is about Katie, an Amish girl with a large heart, and strong opinions both of which lead her into a lot of trouble throughout the book. I really loved Katie. She was so genuine; I loved that unlike others in her community who followed the words of the Elders so blindly, Katie actually thought about things. She always had good intentions in mind, and did what she believed to be right in her heart.

I always find it fascinating to read about the Amish culture. While there is so much outside influence in this story, we still get to learn a lot about traditional Amish practices and beliefs. In other books about the Amish that I've read, the language they use really grated on my nerves, but besides the use of "ja" the author didn't make it seem like gibberish.

Major violence warning on this one!! Honestly I would say 18+ the gore is so bad. I had seen it called suspense, not horror, so I wasn't expecting the amount of blood and guts that I got but Make. No. Mistake. this is horror! There was A LOT of blood and gore and let me tell you the author sparred no details. Literally, the most disgusting things I've ever read. Even when I tried to skim over passages, there was so much detail and it went on for so long, I ended up reading things I wish I hadn't. This was definitely the biggest downfall of the book in my eyes. I just don't see why the author had to be so graphic.

Overall, I loved the mystery, suspense, and romance that The Hallowed Ones provided. But the bloody violence is not easily ignored. Let's just say I'm both excited and terrified of reading the next book in the series.
Posted by Born Bookish at 10:29 AM