Book Review: All the Broken Pieces 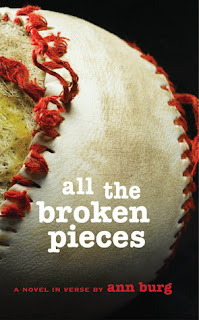 Two years after being airlifted out of war-torn Vietnam, Matt Pin is haunted: by bombs that fell like dead crows, by the family -- and the terrible secret -- he left behind. Now, inside a caring adoptive home in the United States, a series of profound events force him to choose between silence and candor, blame and forgiveness, fear and freedom.

All The Broken Pieces gives us a beautifully written look into the after effects of war, through the eyes of a seventh-grade boy named Matt Pin.

Matt was rescued from the Vietnam War and taken to America where he was adopted into a loving American family.

Now two years later, Matt is still carrying around the broken pieces of his past life. Knowing that Matt might need an outlet to talk about what he has been through, he and his father start attending group sessions for war veterans who served in the same war that Matt escaped. It is then that Matt must decide whether he is going to carry those broken pieces forever, or if he will open up and share his past with others.

While I enjoyed the issues addressed and the main story behind this book the one thing I was disappointed in was the character development. Besides his past, or the fact that he plays both baseball and piano we really don’t know anything about Matt. Who is he aside from these aspects of his life? What does he do when he’s not practicing baseball or piano? Who are his friends? What is he like when hanging out with friends? These are some of the questions I asked myself while reading.

To sum it up, All The Broken Pieces is a beautifully written, touching story that deals with heavy topics such as the after effects of war, survivor’s guilt, and adoption. The plot was deep, I just wish the characters were too.