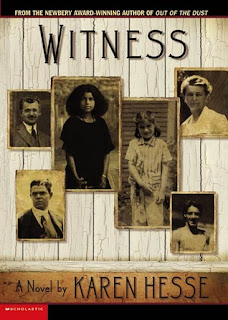 These characters are among the unforgettable cast inhabiting a small Vermont town in 1924. A town that turns against its own when the Ku Klux Klan moves in. No one is safe, especially the two youngest, twelve-year-old Leanora, an African-American girl, and six-year-old Esther, who is Jewish.
In this story of a community on the brink of disaster, told through the haunting and impassioned voices of its inhabitants, Newbery Award winner Karen Hesse takes readers into the hearts and minds of those who bear witness.

It’s always disappointing when you read one book by an author and absolutely love it and then you read another by them and don’t like it. That is pretty much what happened here. I had just read Out of the Dust the night before and was expecting another great book but instead was very disappointed with what I found.

This is a work of historical fiction about a small town in 1924 and how it affects them when the Ku Klux Klan moves into town. Told in five “acts”, the story unfolds before us through the eyes of eleven different characters, each passage told from a different point-of-view. The cast of characters was just too large and hard to keep track of. There was a cast list in the front of the book with pictures of each character, which was nice but I got sick of flipping back and forth between pages every time I couldn’t remember who someone was.  Needless to say this really hindered me from connecting with any of them.

I apologize for the really negative review but this book just wasn’t for me. I am still planning to read more of Hesse’s work in hopes they will be more like my first experience with her writing, which was the polar opposite of this one.
Posted by Born Bookish at 5:28 PM