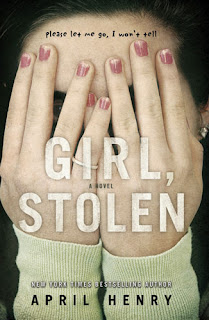 Title: Girl, Stolen
Author: April Henry
# Of Pages: 224
Publisher: Henry Holt and Co.
Publication Date: September 28, 2010
Level: Young Adult
Rating:  5 Hearts
Synopsis
(From Barnes&Noble)
Sixteen year-old Cheyenne Wilder is sleeping in the back of a car while her mom
fills her prescription at the pharmacy.
Before Cheyenne realizes what’s happening, their car is being stolen—with her inside!
Griffin hadn’t meant to kidnap Cheyenne, all he needed to do was steal a car for the others.
But once Griffin’s dad finds out that Cheyenne’s father is the president of a powerful corporation, everything changes—now there’s a reason to keep her.
What Griffin doesn’t know is that Cheyenne is not only sick with pneumonia, she is blind.
How will Cheyenne survive this nightmare, and if she does, at what price?
My Verdict
I found it hard to choose a rating for this book. It was a page-turner for sure, it was impeccably written, but it was also about what I consider to be dark subject matter.
This book made me feel like I was reading an episode of Without a Trace or another one of those crime dramas. I usually don’t like reading books about this kind of stuff. So my first reaction to a book about a young blind girl who gets kidnapped was No Thank You! But then I started to read a lot of good things about it, so I decided to give it a shot. And I’m really glad that I did.
I thought the writing in this book was incredible. There were no wasted words. It was as if each word was carefully selected. It was pretty short for a YA novel but I can see why. It helped to keep up the tension, and steady pace of the plotline throughout the whole book.
Cheyenne was an incredibly strong main character. I was impressed by how much she was able to keep her wits about her throughout such a terrifying and traumatizing experience. She never gave up; she stayed strong, and was always thinking one step ahead of her captors.
The relationship between Cheyenne and Griffin was an awkward one. Griffin is the one who took Cheyenne, but he didn’t do it on purpose. Then he keeps her with full intent of letting her go later…that is until Griffins dad finds out what happened and that her father is the president of Nike. Then everything changes.
Cheyenne and Griffin become friends of sorts throughout the whole thing. Griffin transforms from captor to protector as the story progresses. He knows that he made a mistake and he doesn’t want Cheyenne to get hurt because of him. I liked Griffin, which seemed wrong to me; he was the bad guy, essentially. I felt like I should hate him, but I didn’t. I couldn’t.
Posted by Born Bookish at 4:24 PM