Book Review: If I Stay by Gayle Forman

With me being buried in schoolwork 24/7 I haven’t had much time for reading and or blogging, in which case, I decided it was time to call for back up. My mom loves reading YA just as much as I do and we share the same taste in books. So I turned on my youngest daughter charm and convinced her to write a few reviews for me =) You may already know my mom a.k.a Ruth from her blog Out on a Limb: Shy Writer Goes Social. If not just click on the link to check it out. 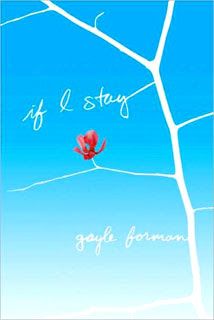 Title: If I Stay
Author: Gayle Forman
# Of Pages: 208
Publisher: Dutton Juvenile
Publication Date: April 2, 2009
Level: Young Adult
Rating: 5 Hearts
Synopsis
(From Barnes&Noble.com)
In the blink of an eye everything changes. Seventeen-year-old Mia has no memory of the accident; she can only recall what happened afterwards, watching her own damaged body being taken from the wreck. Little by little she struggles to put together the pieces - to figure out what she has lost, what she has left, and the very difficult choice she must make. Heart-wrenchingly beautiful, Mia's story will stay with you for a long, long time.
Her Verdict
First off, I confess, I purchased this book because of the beautiful cover. But that's not much of a confession; a lot of you probably judge books by their covers all time. The part that's truly hard to fess up to is the fact that I put it on my bookshelf, and forgot about it - for years. I finally read it last month, using the receipt, dated July 23, 2009, as my bookmark.
I love the family dynamics in this story. Who says you need a dysfunctional family to create drama? Mia is part of a healthy, loving family, but there's nothing boring about them. Her father is an ex-musician who is finally growing up and has become a schoolteacher, and her mother has a regular 9-5 job but is still a rocker at heart. Then there’s her little brother Teddy, as well as extended family.
Much of the focus is on Mia and her boyfriend, Adam, who are brought together through their love of music. For her it's playing cello in the orchestra. For him it's as lead singer/guitarist in a punk rock band. She’s got her eye on Julliard and he and his band are trying to make a name for themselves on the tour scene. It’s those differences that make their relationship a challenge.
Tragedy strikes early on in this book, but we get to know the characters through Mia’s recollections as she waits to find out the fate of her loved ones, as well as her own. In the end it comes down to a decision, does she still have anything left to live for?
This book has its fair share of tragedy, but at its heart it's uplifting as well, because it’s just as much about the bonds of Mia's relationships as it is about losing them.
The best part about reading this book two years late is that I didn't have to wait for the sequel. Heck, I didn't even know there was a sequel. As I closed If I Stay and ran my hand over the cover, in that way I do when a story I love has ended, my daughter told me there was a second book, and she even went out and picked it up for me!
Posted by Born Bookish at 10:05 AM