Randomness: End of the Year Survey/Books read in 2011

The end of year book survey is hosted by The Perpetual Page-Turner
1. Best Book You Read In 2011?
Too many to choose! Look at my top ten books of 2011 post.
2. Most Disappointing Book/Book You Wish You Loved More Than You Did?
The Unbecoming of Mara Dyer- I heard so many good things about this one, I thought for sure I'd love it too.
3. Most surprising (in a good way!) book of 2011?
Sean Griswold's Head by Lindsey Leavitt
4. Book you recommended to people most in 2011?
Delirium & Divergent- All my friends are dystopian lovers like me ;)
5. Best series you discovered in 2011?
hush, hush by Becca Fitzpatrick- (I'm not counting any books where only the first one is out so far, otherwise this list would be huge!)
6. Favorite new authors you discovered in 2011?
Katie Kacvinsky, Lauren Oliver, Becca Fitzpatrick, Lisa & Laura Roecker, Tahereh Mafi
7. Best book that was out of your comfort zone or was a new genre for you?
Shiver by Maffie Stiefvater- Besides Twilight I had no interest in werewolves at all.
I wouldn't have ever touched these books on my own, but after getting a recommendation
from a friend I had to give them a try.
8. Most thrilling, unputdownable book of 2011?
Shatter Me by Tahereh Mafi
Crescendo by Becca Fitzpatrick
9. Book you most anticipated in 2011?
The Day Before by Lisa Schroeder
10. Favorite cover of a book you read in 2011?

11. Most memorable character in 2011?
Ooo, this is a hard one. I think I'd have to say Tris from Divergent by Veronica Roth
12. Most beautifully written book read in 2011?
Chasing Brooklyn & Far From You by Lisa Schroeder
Shatter Me by Tahereh Mafi
13. Book that had the greatest impact on you in 2011?
Reaching for Sun by Tracie Van Zimmer -Warmed my heart and made me smile
Just one Wish by Janette Rallison- Made me bawl my eyes out, and die laughing.
Crescendo by Becca Fitzpatrick- Made me so frustrated I thought I would blow a gasket!
14. Book you can't believe you waited UNTIL 2011 to finally read?
Hush, Hush by Becca Fitzpatrick
I am Number Four by Pittacus Lore
15. Favorite passage/ Quote from a book you read in 2011?
"Hope is a pocket of possibility. I'm holding it in my hand."
"Raindrops are my only reminder that clouds have a heartbeat. That I have one, too."
“I always wonder about raindrops. I wonder about how they’re always falling down, tripping over their own feet, breaking their legs and forgetting their parachutes as they tumble right out of the sky toward an uncertain end."
- All quotes from Shatter Me by Tahereh Mafi
16. Book that you read in 2011 that would be most likely to reread in 2012?
Delirium by Lauren Oliver & Shatter Me by Tahereh Mafi
17. Book that had a scene it it that had you reeling and dying to talk to somebody about it?
The shocking/cliffhanger endings of so many of these new series! (Delirium, Possession, Mara Dyer, Eve)
And the final count is...
I tallied up this afternoon and the total number of books I read this year is 60. I know a lot of you guys read much more than that but with how demanding school was this semester I'm surprised I even read that many! My goal for 2012 is to read eighty =D Hope everyone has a Happy New Year!!! 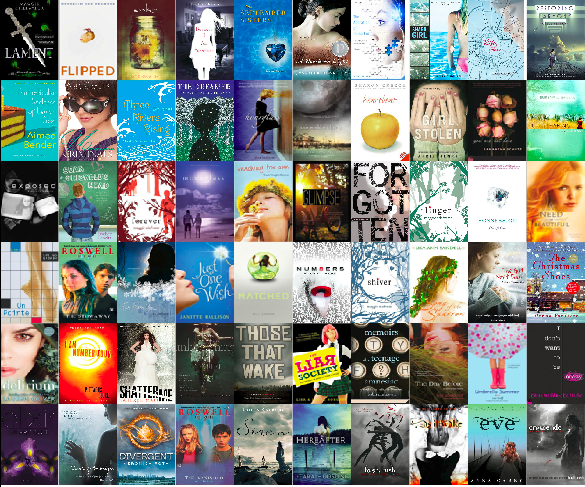