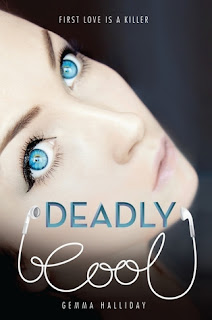 First I find out that my boyfriend is cheating on me. Then he’s pegged as the #1 suspect in a murder. And now he’s depending on me to clear his name. Seriously?

As much as I wouldn’t mind watching him squirm, I know that he’s innocent. So I’m brushing off my previously untapped detective skills and getting down to business. But I keep tripping over dead bodies and I’m still no closer to figuring out who did it. And what’s worse: all signs seem to point to me as the killer’s next victim.

I really need to pick a better boyfriend next time.

I’m finding this review rather hard to write because as much as I enjoyed this book, I also had some major issues with it. It was a fun, page turning mystery that I devoured fairly quickly, yet I also felt like it was very disrespectful and almost mocking about certain subjects.

When it came to the characters, aside from main character, Huntley and her best friend, Sam everyone else was super stereotyped.

The whole Chastity club part of the book was a pretty big deal, which is actually where my biggest quarrel lies. There were times the author almost seemed to be making fun of those who have made the decision to stay chaste. She portrays these characters as unrealistic, hypocritical, and a little nuts. Now you may not agree with a decision but that doesn’t mean you have to write a whole book that makes fun of it.

I was torn whether or not I should read the next book for fear it might have the same demeaning quality about it, but at the same time I really want to see where Huntley’s life goes from here. I guess I’ll give it a try and see how things go…
Posted by Born Bookish at 9:24 AM