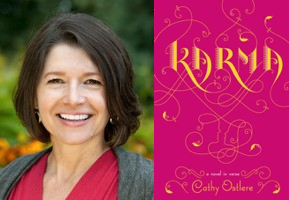 Cathy Ostlere is the author of young adult novel in verse, Karma.

Synopsis (from Goodreads)
On October 31, 1984, Indira Gandhi is gunned down by two Sikh bodyguards. The murder sparks riots in Delhi and for three days Sikh families are targeted and killed in retribution for the Prime Minister’s death. It is into this chaos that sixteen-year-old Maya and her Sikh father, Amar, arrive from their home in Canada. India’s political instability is the backdrop and catalyst for Maya’s awakening to the world.

Born Bookish: Karma is your first book for young adults, what made you want to branch out to a new audience?

It's funny, but I never really thought about specifically writing to a new audience. Karma was the story I wanted to tell and it turns out it is perfectly suited to a young adult readership. As I was writing I found the character Maya to be strong and resilient and I was delighted to be able to share her with readers who are a similar age.

Born Bookish: Your adult novel, “Lost” is written in traditional prose, what made you want to tell Karma in verse?

"Lost" began as poetry but developed into prose. "Karma" began as prose and turned into poetry. I'm not sure I can explain why both books changed except to say it felt right for each story. Writing is an organic process and writers sometimes must take their cues from gut feelings.

Born Bookish: The murder of Prime Minister, Indira Gandhi and the Sikh community massacres that followed are real life events that took place in Delhi, India in 1984. What inspired you to write a book on this specific event?

The story of the 1984 slaughter of innocent Sikhs and the Hindus who tried to help them is a story not often told. And I believe it's an important story. There are many important discussions that can come from knowing about this event: religious tolerance, the immigrant experience, racism, and the power of teenage love.

Born Bookish: Karma is considered to be Historical Fiction. How many hours of research did you have to put in prior to writing in order to make this novel historically, and culturally accurate?

Good question! I really have no idea! I researched while I wrote instead of doing all the research up front. This was done because I didn't know what kind of research to do until my characters found themeselves in particular settings and situations. My characters lead me into the story. But my research made it real and true.

Born Bookish: Can you tell us a little bit about your writing process for Karma?

I write five days a week, about 4-5 hours a day. I write whatever comes to mind, allowing the characters do whatever they please. Then I spend a year editing the story, giving it shape, and making sure the characters make sense.

Maya was the easiest. She just seemed like a real girl to me: a girl who needed me to tell her amazing story. But 17 year-old Sandeep was fun to write! He's very bold and mouthy and mixed-up and a little funny-looking. He made me laugh.


Born Bookish: What is your favorite novel in verse?

It's hard to pick just one. But if I have to I'll say Helen Frost's "Keesha's House". By using traditional sestina and sonnet forms she draws the readers into the lives of seven struggling teenagers. The writing is spare but the story is large. It's a remarkable literary feat.

For many readers, poetry is a daunting genre. They think it will be difficult to read. They think there won't be a story they can grab onto. They think it won't make sense to them. Because of these assumptions, the idea of reading a verse-novel just isn't that appealing. But of course, verse-novels have come such a long way in the last five years and the readership is growing in leaps and bounds. So many teens (and adults) are discovering that the spare voice, the right word, the beautiful description, and the powerful voice of a character is a rich experience. I think more teachers should put verse novels in front of students. The stories read quickly but often the ideas and characters stay a long time.

Born Bookish: If you could take any classic novel and re-write it in verse, which would you choose?

Born Bookish: What was your favorite children’s book growing up?

Honestly, I was a big big Nancy Drew fan! I loved all the mysterious settings: hidden staircases, tunnels, attics, mansions, castles, ranches, and ships. Mystery! Secrets! Danger! I was glued to the books.

Born Bookish: Do you have any books in the works that you can tell us a little bit about?

I am working on a new YA book that has secret tunnels in it. Perhaps I'm invoking a little of Nancy Drew!

Born Bookish: Here at Born Bookish, I have a segment called Breathtaking Book Covers where I post the cover image of a book that I think is stunning. Is there a book cover that has ever taken your breath away? If so, what book?


A BIG thanks to Cathy for the interview!!! She was also super nice and sent me a bunch of bookmarks for you guys! The first three  people to link up a novel in verse review this month will get one of these bookmarks =)
Posted by Born Bookish at 6:00 AM