Book Review: The Sea of Tranquility by Katja Millay 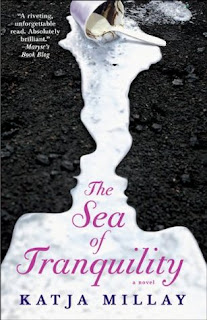 I live in a world without magic or miracles. A place where there are no clairvoyants or shapeshifters, no angels or superhuman boys to save you. A place where people die and music disintegrates and things suck. I am pressed so hard against the earth by the weight of reality that some days I wonder how I am still able to lift my feet to walk.

Former piano prodigy Nastya Kashnikov wants two things: to get through high school without anyone learning about her past and to make the boy who took everything from her—her identity, her spirit, her will to live—pay.

Josh Bennett’s story is no secret: every person he loves has been taken from his life until, at seventeen years old, there is no one left. Now all he wants is be left alone and people allow it because when your name is synonymous with death, everyone tends to give you your space.

Everyone except Nastya, the mysterious new girl at school who starts showing up and won’t go away until she’s insinuated herself into every aspect of his life. But the more he gets to know her, the more of an enigma she becomes. As their relationship intensifies and the unanswered questions begin to pile up, he starts to wonder if he will ever learn the secrets she’s been hiding—or if he even wants to.

While this story was very unique, mysterious, and occasionally sweet, the bad outweighed the good for me.

The story is told from alternating points of view; Nastya and Josh. Nastya survived a traumatic experience when she was fifteen that took away the one thing she loved most in life, her ability to play piano. Now, three years later she is still consumed by fear, anger, and hatred for what happened to her. It takes awhile for us to figure out what happened in Nastya’s past. We get small snippets here and there until the full story comes out at the end. I really couldn’t understand Nastya’s mindset most of the time. She didn’t respect herself at all and was so self-destructive it was painful to watch.

Then we have Josh, another person who’s past is full of pain and loss. New to school, Nastya tries her hardest to push everyone away, but there is something about Josh that draws her in. The two start to form this odd relationship that goes from hate, dislike, like, to love. I didn’t really love Josh either. I liked him most of the time but then he would do something stupid and really bug me.  He was also pretty self-destructive, not letting anyone into his life who he could later lose, because inevitably that’s what always happened.

My main issue with this book was the swearing and sexual comments every two seconds. There were more F-words in this book than I’ve probably heard in my entire life, and the disgusting sexual “jokes” they were constantly making were not funny. Had these two aspects not been so prevalent, I would have enjoyed this story a lot more!

Overall, this just wasn’t the right book for me.
Posted by Born Bookish at 6:41 PM