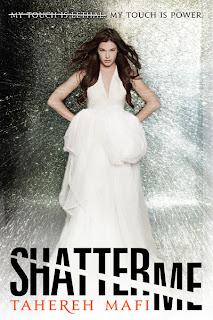 Title: Shatter Me
Author: Tahereh Mafi
# Of Pages: 352
Publisher: HarperCollins
Release Date: November 15, 2011
Level: Young Adult
Rating: 5 Hearts
Synopsis
(From Amazon.com)
“ You can’t touch me,” I whisper.
I’m lying, is what I don’t tell him.
He can touch me, is what I’ll never tell him.
But things happen when people touch me.
Strange things. Bad things.
No one knows why Juliette’s touch is fatal,
but The Reestablishment has plans for her.
Plans to use her as a weapon.
But Juliette has plans of her own.
My Verdict
I’ve been dying to read this book since the first moment I heard about it. I was so excited when the owner of a local bookstore agreed to let me borrow ARCs to review on my blog. I went to the store to pick out a few and when I saw a copy of Shatter Me sitting there I practically started dancing right there in the middle of the store.
Shatter Me is a stunning debut by Tahereh Mafi that is sure to be the start of a very promising career as a YA author. Tahereh’s writing style is both unique and captivating. The story is written from the main character; Juliette’s perspective and her descriptions are beautiful, like a work of art. I frequently found myself going back and rereading parts because they were just so pretty.
“I always wonder about raindrops. I wonder about how they’re always falling down, tripping over their own feet, breaking their legs and forgetting their parachutes as they tumble right out of the sky toward an uncertain end."
Another thing that set apart Tahereh’s writing is her use of strikeouts. Everything Juliette wants to say, but doesn’t, appears with a line through it. I had never seen this before, but it worked perfectly for this story.
Juliette has been locked up in an asylum for 264 days, she hasn’t been touched in 6,336 hours and she hasn’t spoken since she got there. But all this changes when a boy named Adam walks into her cell.
All the characters in this book are so deep, complex, and full of emotion. I immediately connected with Juliette and cared about what happened to her. Despite the horrible life she has had, Juliette is caring, and hopeful. She has so much love in her heart and is just dying to have someone to share it with.
-       Adam is incredible. He is caring, strong, brave, protective, and full of hope for a better future. He may be my new favorite male protagonist.
-       Warner is s bad guy to the fullest extent of the words. Pure evil. He kills in an instant and doesn’t ever think twice about it. His only weakness is his love for Juliette and the fact that he would do anything for her.
-       I also have to mention Kenji and James, they don’t come into the story until later on but they both add so much to the story. Kenji is the funny guy, bringing a lighthearted feel to some tense situations. James is so energetic, and full of life, he’s been through a lot for a boy his age but he doesn’t let that drag him down.
The only downfall of this book was that there was some swears scattered throughout. There were also some pretty intense romance scenes, I wouldn’t recommend for younger audiences. (Amazon recommends ages 14+)
I read this book in one sitting (well technically two, since I took a break for dinner). The story sucked me in with the first sentence and never let me go. Something is always happening, always about to happen.
I didn’t know this book was the first in a set but I couldn’t be more excited to know that I will get to read more about this world, and these characters! Unfortunately, it’s going to be a long wait.
Posted by Born Bookish at 9:42 AM