Book Review: There You'll Find Me by Jenny B. Jones 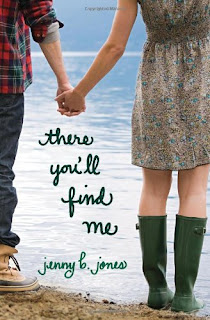 Grief brought Finley to Ireland. Love will lead her home.
Finley Sinclair is not your typical eighteen-year-old. She's witty, tough, and driven. With an upcoming interview at the Manhattan music conservatory, Finley needs to compose her audition piece. But her creativity disappeared with the death of her older brother, Will.
She decides to study abroad in Ireland so she can follow Will's travel journal. It's the place he felt closest to God, and she's hopeful being there will help her make peace over losing him. So she agrees to an exchange program and boards the plane.
Beckett Rush, teen heartthrob and Hollywood bad boy, is flying to Ireland to finish filming his latest vampire movie. On the flight, he meets Finley. She's the one girl who seems immune to his charm. Undeterred, Beckett convinces her to be his assistant in exchange for his help as a tour guide.
Once in Ireland, Finley starts to break down. The loss of her brother and the pressure of school, her audition, and whatever it is that is happening between her and Beckett, leads her to a new and dangerous vice. When is God going to show up for her in this emerald paradise?
Then she experiences something that radically changes her perspective on life. Could it be God convincing her that everything she's been looking for has been with her all along?

It was nice to read a Christian YA book where I wasn’t rolling my eyes every two seconds from the cheesiness of it all. This book was actually realistic the way author, Jenny B. Jones portrayed relationships, faith, and hardship.

The main character, Finley, broken hearted and lost after her brother’s death, decides to take a trip to Ireland. With her brothers travel journal in hand Finley plans to retrace his steps and hopefully heal her relationship with God, who she thinks has forgotten about her.

On the plane ride she is seated next to teen movie star Beckett Rush. He barley opens his mouth before Finely shuts him down, claiming to know his type (bad boy, partier, player). They part ways after the flight only to find out that Beckett is staying at the B&B her host family owns, throwing them together once again.

I liked Finley, she was a really believable and realistic main character. She has a strong personality and is not afraid of speaking her mind, whether it be to the school bully, Beatrice, or heartthrob, Beckett. Finley is flawed and real. I think anyone could relate to her in one way or another. I was able to relate to her in more than one. I really liked how whenever she was nervous or had to do something hard she would recite the same Bible verse to herself, “In all these things, I am more than victorious.” I loved this because I do the same exact thing, with the same verse! The version I know is “I can do all things through him who gives me strength.”

Beckett is a real charmer. I can see why Finley doubted him at first but it didn’t take long to see that he really was a genuine, sweet guy. It took a lot of convincing for Finley to believe that. Even after they’d hung out and spent hours upon hours together Finley still doubts him, which was a little annoying, but she comes around in the end.

This was a great story about finding out that one is never lost with God. He is always there, with his arms wide open, waiting for us to find him.
Posted by Born Bookish at 9:07 AM