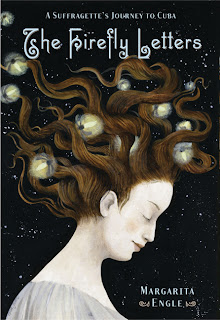 The freedom to roam is something that women and girls in Cuba do not have. Yet when Fredrika Bremer visits from Sweden in 1851 to learn about the people of this magical island, she is accompanied by Cecilia, a young slave who longs for her lost home in Africa. Soon Elena, the wealthy daughter of the house, sneaks out to join them. As the three women explore the lush countryside, they form a bond that breaks the barriers of language and culture.

This was a beautifully written middle grade novel about life and slavery in Cuba, based on the writings of the real life Fredrika Bremer.

The story is told from four alternating viewpoints; Elana, Cecilia, Fredrika, and Beni.

-Elena is a plantation owners daughter, trapped within the walls of her own home, never allowed to go out and catch fireflies or walk beneath the moonlight.

“I sit alone in my room
at the ornately barred window,
embroidering curlicues
like the fancy ironwork
that separates me
from the rest of the world.”

-Cecilia is a fifteen-year old slave from Africa who was sold by her own father in exchange for a cow. She works on Elena’s family’s sugar plantation as a translator.

“If I had known
that my father would trade me
for a stolen cow,
I would have run away
into the forest
to live in a nest
made of dreams
and green leaves.”

-Fredrika is a rich man’s daughter, who gave up the aristocratic lifestyle to wander the world and be a writer.

“My sketchbook is bursting
with stories
told by dances,
stories about life on two shores…
two distant lands,
Africa and Cuba,
joined and also separated
by the endless flow
of ocean waves
that sound
like music…”

-Beni is Cecilia’s husband, chosen for her by Elena’s father. There are only a couple of pages told from Beni’s perspective, but I found it nice to see his thoughts on Cecilia and their marriage instead of just having her point of view.

Fredrika believes in a world of equality, not just between men and women, but also between the races. She goes to Cuba to write about slavery on the island in hopes of bringing about change.

Against all odds the three girls form a strong friendship filled with shared hope for a brighter future.

I found Engle’s writing to be very lyrical and beautiful. My only wish was that it would have lasted longer.
Posted by Born Bookish at 4:36 PM