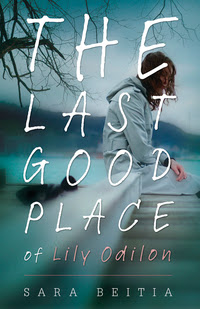 "We have to get to her first…"

Abducted? Runaway? Murder victim? Lily Odilon—local wild child from a middle-of-nowhere town—has vanished after spending the night with her boyfriend, new kid Albert Morales. Suspected in her disappearance, Albert sets out with Lily’s prickly younger sister, Olivia, to discover what really happened to Lily—and to keep the promise he made to her late one night.

This book was a mix of good and bad. The plot was good, and the author did a good job of creating a well paced and suspenseful read. However, the characters weren’t all that likable and the story’s format was confusing to say the least.

The book wastes no time jumping right into the action and kept up a good pace throughout. While a lot of the time I could see what was coming even though Albert was absolutely clueless, there was still a sense of suspense for the overall plot that kept me intrigued, kept me reading.

I really didn’t feel any connection with the main couple, Lily and Albert.

You really only get to know Lily first-hand for a few chapters, after that the only way you learn about her is through Albert’s memories, so she felt like a stranger to me. I felt bad for her and the situation she was in, but I didn’t really like her as a character.

With Albert, who is the main narrator of the story, it wasn’t that I didn’t know him. I couldn’t quite put my finger on why I disliked him so much. I think it might have just been because he makes a lot of stupid decisions over the course of the book and by the middle of it I was so fed up I just wanted to shake some sense into him!
Posted by Born Bookish at 7:23 AM