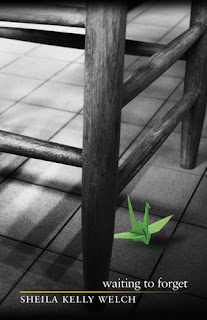 Note: Thanks so much to Shelia Kelly Welch for sending me a copy of her book in exchange for an honest review!

T.J. has always looked out for his little sister, Angela. When Momma used to go out and leave them home alone, he'd lock the door so they'd be safe, keep Angela entertained, and get out the cereal and milk for her. When Momma's boyfriend got angry at them, he'd try to protect Angela. Later, at their foster homes, T.J. was the only one who knew how to coax his little sister out of her bad moods. The only one who understood why she made origami paper cranes and threw them out the window. But now T.J. is sitting in the waiting room at the hospital, wondering if Angela, unconscious after a fall, will ever wake up. Wondering, too, if he will ever feel at home with his and Angela's new parents—Marlene, who insists on calling him Timothy, and Dan, who seems to want a different son. Going back and forth between Now and Then, weaving the uncertain present with the painful past, T.J.'s story unfolds, and with the unfolding comes a new understanding of how to move forward.

I always have such a hard time rating books that deal with tough subject matter. I settled on three hearts because it was well written, the characters well developed, and because the story was one worth telling. The thing that held it back from a higher rating for me was just how upsetting and sometimes depressing the storyline was.

The book opens with the main character T.J, sitting in a hospital waiting room wondering if his little sister Angela is going to survive. We know she fell but we don’t know how or why.

The book included three main timelines: Now, Then, and Between Then & Now, with a few additional sections (Between, Almost Now…) near the end. I found this writing style to be very affective for this story.

T.Js time at the hospital are the “Now” pieces. The author uses these parts to create tension and suspense as to what happened to Angela and if she is going to be okay. It’s not until the last few pages that we get the answers.

In the “Between” sections, T.J. and his sister Angela have just been adopted by a couple named Marlene & Dan. This is yet another smaller mystery because in the “Then” the kids are still living with their birth mother, so the whole-time you’re also wondering what happens to her that lands the kids in the foster care system.

My biggest issue with this book was that it was upsetting to read about a mother who cared so little about her own children. The mother (Celia) is a single mom who can’t hold a job (not because she can’t get one, but because she always quits), and she goes through many boyfriends (most of which are bad news).  The thing that upset me most was when one of her boyfriends would treat the kids like dirt and she just stood there and watched. At one point, I was so angry I wanted to jump into the book and shake some sense into her! The boyfriend has just flushed her 7-year-olds head down the toilet repeatedly and she blames the daughter for misbehaving, not her brute of a boyfriend! (There was practically steam coming out of my ears at this point.)

In the end, I’m glad I read this book. Despite it’s upsetting subject matter it was a good story, but I say that as a 21-year-old. However, this is meant to be a middle grade book for ages 10-15. I guess it all depends on the person, but this is definitely not the kind of book I was reading at 10 OR 15. It’s some heavy stuff for a 10 year old to handle in my opinion. I would recommend if for the oldest end of that and say 15 +.
Posted by Born Bookish at 6:34 PM