YA Review: Broken by C.J. Lyons 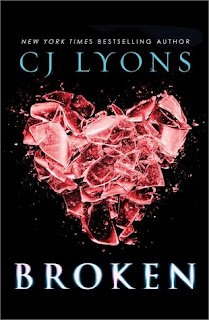 I think it's going to be hard to judge this book for what it is rather than how it was marketed. The back of the book calls Broken a "riveting suspense and taut drama" a lot of reviews I read previously also talked about it as if it were a fast-paced thriller. This is not the case at all. It was basically your average contemporary romance with a slight mystery that doesn't turn suspenseful until the last few chapters. Had I just been expecting a contemproary romance going into it, I may have enjoyed it more than I did. Unfortunely, I was expecting an edge of your seat medical thriller that wasn't there.

The main character, Scarlet, has been diagnosed with Long QT disease, which means her heart beats irregularly and could kill her at any moment. After spending most of her life in the hospital, Scarlet decides she wants to take the time she does have left and go to high school like a normal kid. Her parents are dead set against it, but they decide to let her go on a trial basis.

Scarlet immedietly makes friends with Jordan, Nessa, Celina and Tony. The "wrong" crowd according to Scarlets mother. Ugh, her mother drove me nuts! She made all of Scarlet's decisions for her and did things like feed her vitamins in front of all her friends in the middle of the school cafeteria. Seriously?! I can't think of any teenager that would put up with that.

The book is divided into five sections set over the course of one school week (Monday - Friday). A lot of the time I was bored with the little details of Scarlet's school day, but I guess we were supposed to be overwhelmed by the experience as much as she was.

I was appaled by the bullying that went on at the school and that the students so easily got away with it. I was home schooled, so thankfully I never had to deal with bullying first hand or see it happening to those around me, but I know it's a big issue that is overlooked all too much!
﻿
With the ending came a big twist and a few fast-paced pages, but it was pretty short lived for a so-called "riveting suspense." If you're a contemporary lover looking for a romance with a little something different I'd check this one out. If you're looking for a fast paced medical thriller, keep looking.
Posted by Born Bookish at 3:03 PM