YA Review: Displacement by Thalia Chaltas 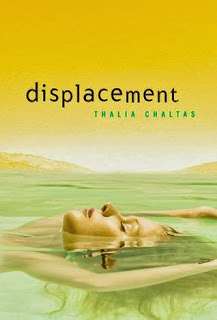 Home is supposed to be a place you belong. It's supposed to be parents who are there and siblings who bug you and a life that feels comfortable. It's not supposed to be an absentee mother or a drowned sister. But that's Vera's reality, and she can't stand it anymore. So she runs. She ends up in an old mining town in the middle of the California desert. It's hot, it's dusty, and it's as isolated as Vera feels. As she goes about setting up her life, she also unwittingly starts the process of healing and-eventually- figuring out what home might really mean for her.

Having read Chalta's first book, Because I Am Furniture, I was a little worried this would be another heavy-subject story, beautifully written but upsetting. While Displacement does tackle the heavy subject of losing ones sibling it was not as emotionally upsetting as I was expecting.

How often do you meet a main character who's a seventeen year old girl, studying geology, who runs away from home to the desert because she's excited about the geological possibilities? Vera was such a refreshing MC, super smart, honest, hot-headed at times but usually for good cause.

Along with the dessert setting came some very unique characters; Milo, Pearl, Dempsey, and Tilly. Only one of them was a main-ish character so while the others weren't fully developed, they played their role of odd small town characters. The way Tilly talked was SUPER annoying, here's a short example of what I mean.

"What kind of job you think we got in thith plate?"

Overall, this was refreshingly unique and totally unpredictable. The verse format lent itself perfectly to Vera's story of loss, family, friends, and ultimately how to move on after the death of a loved one. I look forward to whatever subject Chaltas decides to tackle in her next book!
Posted by Born Bookish at 7:38 AM