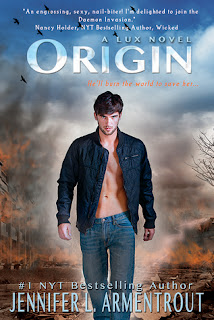 Together, they can face anything. But the most dangerous foe has been there all along, and when the truths are exposed and the lies come crumbling down, which side will Daemon and Katy be standing on? And will they even be together?

Ahhhhhhh! I can't even tell you how hard it was to wait for this book to come out, but if you've read the rest of the series I'm sure you know exactly what it was like. I literally woke up on the 27th, got on my computer and downloaded this Kindle book. I would have devoured it in one sitting if it wasn't for the fact that I had to go to work =P so it took me longer to get through than I would have liked.

Unlike the rest of the books which were told from Katys perspective, this one was told using dual points-of-view since Daemon and Katy are separated for a decent chunk of it. I really loved getting both POVs; it made me love Daemon just that much more.

We are introduced to some new characters, Archer, being the main addition. I'm curious to hear how others felt about him?? I liked him from the first moment he and Katy met. I just knew he was gonna end up helping them out. Even though Daemon & Katy still don't trust him, I really think he's one of the good guys. At least I hope he is! I want him and Dee to get together =)

The pacing of this one was SO much  better than the last, it starts right in the thick of things and there was never a dull moment. The 400 pages flew by because it was one thing after another right until the very end.


After that horrible cliffhanger that was book three, I kept waiting for things to go bad in the last few chapters, dread in my stomach waiting for it to come, but I'm happy no I'm THRILLED to report the ending this time around was not a cliffhanger. I repeat NOT A CLIFFHANGER. I don't feel the need to hunt Jennifer down and force her to tell me what happens next like I did last time around. No, this time, I am content in waiting.
Posted by Born Bookish at 7:51 AM