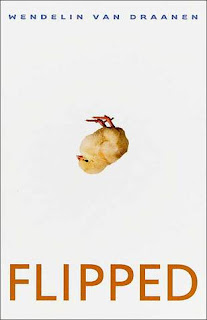 Title: Flipped
Author: Wendelin Van Draanen
# Of Pages: 224
Publisher: Knopf Books for Young Readers
Publication Date: October 9, 2001
Level: Middle Grade
Rating: 5 Hearts
Synopsis
(From Barnes&Noble.com)
Flipped is a romance told in two voices. The first time Juli Baker saw Bryce Loskie, she flipped. The first time Bryce saw Juli, he ran. That’s pretty much the pattern for these two neighbors until the eighth grade, when, just as Juli is realizing Bryce isn’t as wonderful as she thought, Bryce is starting to see that Juli is pretty amazing. How these two teens manage to see beyond the surface of things and come together makes for a comic and poignant romance.
My Verdict
You know when you have the TV on but you’re not really watching it; it’s more of just background? Well that’s what was going on one day when all of a sudden this movie started called Flipped. I got sucked in and soon my whole family was sitting there watching this movie. It was family friendly and super cute! It was actually one of those encore movies where they play it back to back. I’ll admit it. I watched it both times. Anyway, I found out the movie was based on a book, so of course I HAD to read it!
The book was awesome! I usually don’t like reading a book after I see the movie; I like to read the book beforehand. But in this case, I didn’t know about the book until after the movie and I just had to read it! I was actually very surprised at how similar it was to the movie because usually book-to-movie adaptations can be drastically different. It was pretty much word for word the movie but I still enjoyed every page of it.
The chapters alternate between Juli and Bryce’s point of view, which worked really well for this story, I can’t imagine it any other way. They do overlap each other, so for example, you’ll read about what happened at the basket boy auction from Juli’s perspective and then go back to that same event and read it from Bryce’s perspective. You would think this would be monotonous, but it wasn’t. I enjoyed getting to see what each character was thinking of the other at the same moments in time.
I loved how wholesome and honest this story was. Unfortunately, I feel like you don’t see too many stories like this anymore. It may have to do with the fact that it was set in the 60’s, which is another thing I loved about it.
So what you should take away from this review is that both the book and the movie are wonderful and you should go read/watch them now!
Posted by Born Bookish at 2:54 PM