Hey everyone! I know I haven't posted in awhile, I've been consumed with school and homework =/ The good news is that I have another author interview for you guys! Hopefully this will make up for my lack of updates this week =) This time I got an interview with debut novelist...
Myra McEntire! 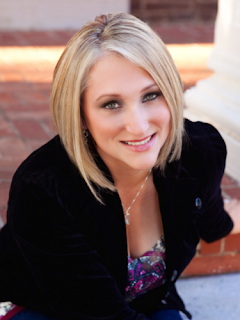 Myra McEntire is the author of the hit novel Hourglass, which is about 17 year old Emerson who can see phantoms from the past. She has tried everything to make these phantoms disappear but to no avail. Then her brother hires a hansom young man named Michael Weaver from the organization hourglass as one last attempt for a cure and thats when everything begins to change. You can read my
review of hourglass here.
Born Bookish: Hourglass is your first book, what does it feel like when you see your book on store shelves?
I still don't believe it's real!
Born Bookish: If you could be one of your characters, who would you be?
Lily. I love how she's no nonsense but still has a sense of humor.
Born Bookish: Which character was it easiest for you to write? Why?
Emerson - largely because we have the same broken edit button.
Born Bookish: Do you find it hard to throw obstacles in your characters way or make life difficult for them?
No, but I do wish I'd made their lives a little more difficult. I have somewhat remedied this in the sequel by killing someone in chapter two.
Born Bookish: If you could have any superpower what would it be? Why?
Invisibility. Or teleportation. OR INVISIBLE TELEPORTATION. I'm nosy.
Born Bookish: A lot of authors use music to help them get into the mindset of their characters. Is this something that helps you? Is so what was the main song that inspired your book?
Music does help, and one of the theme songs is 42 by Coldplay.
Born Bookish: When will you be releasing the title of the Hourglass sequel?
I think around February. (It's killing me.)
Born Bookish: Do you have any new books in the works that you can tell us a little bit about?
I have an idea for a book set in the HOURGLASS world, but I'm working on the world building for something set in the Appalachian Mountains.
Born Bookish: Here at Born Bookish I have a segment called Breathtaking Book Covers where I post the cover image of a book that I think is stunning. Is there a book cover that has ever taken your breath away? If so, what book?
I could stare at the Harry Potter hardback covers for HOURS. Amazing art and detail.