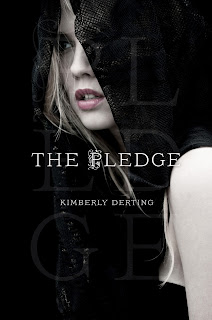 In the violent country of Ludania, the language you speak determines what class you are, and there are harsh punishments if you forget your place—looking a member of a higher class in the eye can result in immediate execution. Seventeen-year-old Charlaina (Charlie for short) can understand all languages, a dangerous ability she’s been hiding her whole life. Her only place of release is the drug-filled underground club scene, where people go to shake off the oppressive rules of the world they live in. There, she meets a beautiful and mysterious boy who speaks a language she’s never heard, and her secret is almost exposed. Through a series of violent upheavals, it becomes clear that Charlie herself is the key to forcing out the oppressive power structure of her kingdom….

Unfortunately, this one was a bit of a letdown from what I had heard and was expecting from it. I still enjoyed it, just not as much as I thought I would. I am in love with the concept of the world that Derting created,  I just think it had some holes in it that could have been filled to make the story stronger.

Each class had their own language, but there was also a universal language, known as Englaise, that everyone was aloud to speak. This just kind of confused things and made me wonder why the classes even existed. Why didn’t everyone just speak Englaise all the time?  So if someone from another class spoke to you in Englaise, you could respond. But if they spoke in their language, you had to bow your head. If you didn’t it could result in immediate execution.

The book was mostly told from Charlie’s point of view with occasional chapters thrown in from others. I found these chapters to be kind of random, although I did enjoy getting a peek into the minds of other characters, even if they were just tiny glimpses!

I liked Charlie, she’s smart, strong, tough, and had a good heart. The only thing that bugged me about her was how easily distracted she was by Max. From the moment they met he consumed her every thought! As for Max, he really didn’t have much of a personality. He was nice enough, but so unoriginal. I felt the same way about their romance; it was just kind of blah.

Two of the other main characters were Charlie’s best friends, Brooke and Aron.

Brook was so annoying; I don’t know why Charlie ever put up with her!

Aron was so sweet and didn’t get nearly enough attention, if you ask me. He and Charlie knew each other since they were kids. They walked to school together everyday where he would carry her bag, and bring her scraps of silk from his father’s fabric shop so she could make new clothes. You could tell he was totally in love with her and she never even seemed to acknowledge this fact. She was to busy swooning over Max.

For a dystopian, the action was pretty disappointing. Stuff happened, it just wasn’t as exciting as it could have been. The action was either too quick or just lacking luster.

This book is number one in a series, which you would never know by the ending. I thought things were tied up nicely and it could have definitely stood on its own. I honestly have no idea where the author is going to go with another book…
Posted by Born Bookish at 6:12 PM