Guest Review: Where She Went by Gayle Forman 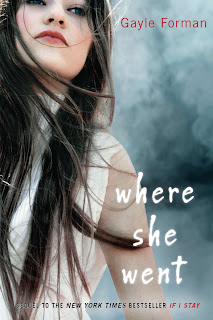 This lovely review was written by my mom, who enjoys reading YA just as much as me. You can find her over at Out on a Limb: Shy Writer Goes Social. Thanks Mom! =)


Now living on opposite coasts, Mia is Juilliard’s rising star and Adam is LA tabloid fodder, thanks to his new rock star status and celebrity girlfriend. When Adam gets stuck in New York by himself, chance brings the couple together again, for one last night. As they explore the city that has become Mia's home, Adam and Mia revisit the past and open their hearts to the future-and each other.


Told from Adam's point of view in the spare, lyrical prose that defined If I Stay, Where She Went explores the devastation of grief, the promise of new hope, and the flame of rekindled romance.

I just finished reading this book for the second time, despite the fact that I have a substantial TBR pile of books that I’ve yet to read once. There are so many reasons to love Where She Went. Here are mine: