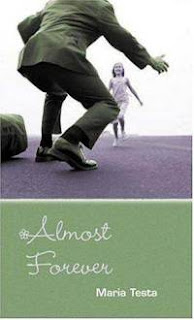 A spare, lyrical - and ultimately heartening - novel about one family’s experience during the Vietnam War that has much to say to a new generation of readers.

Doctors don’t fight; doctors heal. But when the young narrator of Maria Testa’s lyric novel watches her father march off to serve a year in the U.S. Army Medical Corps, a year seems like a very long time. A year is a long time when you’re waiting for letters, waiting for word. A year seems endless when you don’t know where your father is anymore. A year is almost forever when you’re wondering . . . and forgetting.

Almost Forever is a historical fiction book for young readers about a father going off to war in Vietnam and how his family, particularly his daughter, deal with and feel about the situation.

But Daddy wrote to us
every day
from Vietnam
and that changed
everything.”

The story is told from the point of view of a six-year-old girl whose name we never even learn. Since the story has such a young narrator, it was interesting too see how much she understood of what was going on around her. While I thought she grasped it really well for one so young, there were some points where you could see she didn’t fully understand. Like when she talks about her mom watching the news every night and how she thinks it’s because she’s in love with the News anchor.

Never the less, it only took ten minutes to read so you really can’t go wrong.
Posted by Born Bookish at 7:19 PM