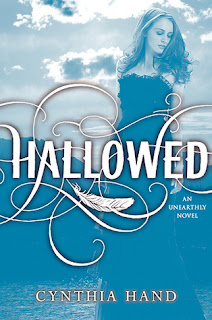 For months Clara Gardner trained to face the fire from her visions, but she wasn’t prepared for the choice she had to make that day. And in the aftermath, she discovered that nothing about being part angel is as straightforward as she thought.

Now, torn between her love for Tucker and her complicated feelings about the roles she and Christian seem destined to play in a world that is both dangerous and beautiful, Clara struggles with a shocking revelation: Someone she loves will die in a matter of months. With her future uncertain, the only thing Clara knows for sure is that the fire was just the beginning.

In this compelling sequel to Unearthly, Cynthia Hand captures the joy of first love, the anguish of loss, and the confusion of becoming who you are.

It’s almost 2 AM as I write this review. I am so worked up about this book. I thought it would be best to wait and write my review at a later date, but after lying awake for almost half an hour thinking of nothing but the book, I had to get up and write it now.

I guess I spoke too soon when I said this book would not disappoint, because it does, big time. Is it still worth four hearts you ask? Yes. Did I still like the overall plot? Yes. Were there times when I just wanted to scream from the anger and frustration of it all?  HECK YES!

The author pretty much took everything that I liked about the first book and threw it down the toilet. I loved Clara in the first book, I agreed with every decision she made and thought she was an amazing main character. This time I hated her. Don’t even get me started on Christian, who I also liked in book one, and downright despised this time around! It’s like reliving the whole Bella, Jacob, and Edward thing all over again. It’s mentally exhausting!

WHY DID YOU PUT ME THROUGH THIS CYNTHIA?!?!?

On that note I must also say that I think it’s a pretty amazing thing when an author can make us get so caught up in their story, and care about their characters so much that it feels like we’re getting betrayed along with them when something bad happens.

I’m sorry, I know this review is little more than an emotional rant, but it was a rant I had to make!
Posted by Born Bookish at 5:13 PM