Book Review: The Power of Six by Pittacus Lore 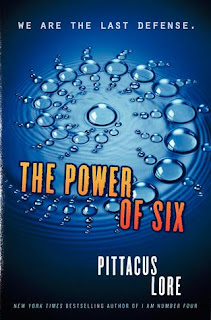 I've seen him on the news. Followed the stories about what happened in Ohio. John Smith, out there, on the run. To the world, he's a mystery. But to me . . . he's one of us.

Nine of us came here, but sometimes I wonder if time has changed us—if we all still believe in our mission. How can I know? There are six of us left. We're hiding, blending in, avoiding contact with one another . . . but our Legacies are developing, and soon we'll be equipped to fight. Is John Number Four, and is his appearance the sign I've been waiting for? And what about Number Five and Six? Could one of them be the raven-haired girl with the stormy eyes from my dreams? The girl with powers that are beyond anything I could ever imagine? The girl who may be strong enough to bring the six of us together?

They caught Number One in Malaysia.
Number Two in England.
And Number Three in Kenya.
They tried to catch Number Four in Ohio—and failed.

I am Number Seven. One of six still alive.

And I'm ready to fight.

Oh my goodness. I can’t believe I waited so long to read this book. Biggest mistake of my life!

Usually with a book this size there is always a dull patch at some point or another, but let me tell you that is not the case with The Power of Six. The ENTIRE book is fast-paced and full of action without a single dull moment. I started the book in the afternoon and read straight through the day and into the night until I was finished.

To clear up any misunderstandings, since the first book was called I Am Number Four and was all about, you guessed it, Four (a.k.a John Smith) I assumed that the Power of Six would be all about number six, but it’s not. The story continues on with Four, Sam, and Six but it also introduces us to number Seven. The two different stories are woven together perfectly, switching back and fourth at the most intense moments creating a constant air of suspense. The switch between characters is easily seen and marked by a change in font.

One thing I do want to mention is the violence. There are a lot of battle scenes with the Magadorians getting stabbed or dismembered with knives. At times this got a little too graphic for my liking but was easily skimmed over. I mentioned this to my sister however, who laughed at me and said what violence? So it all depends on your tolerance, I guess.

Ahhh the ending! The ending left me sitting there staring at the last page, not ready to accept that it was over and that I would actually have to wait until August to find out what happens next. I started frantically searching the Internet to see if anyone was lucky enough to have an ARC of the Legacy of Nine, who I then planned to bribe until they agreed to send it to me!
Posted by Born Bookish at 5:46 AM