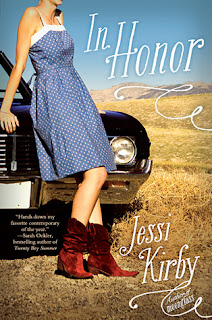 Hours after her brother’s military funeral, Honor opens the last letter Finn ever sent. In her grief, she interprets his note as a final request and spontaneously decides to go to California to fulfill it.

Honor gets as far as the driveway before running into Rusty, Finn’s best friend since third grade and his polar opposite. She hasn’t seen Rusty in ages, but it’s obvious he is as arrogant and stubborn as ever—not to mention drop-dead gorgeous. Despite Honor’s better judgment, the two set off together on a voyage from Texas to California. Along the way, they find small and sometimes surprising ways to ease their shared loss and honor Finn’s memory—but when shocking truths are revealed at the end of the road, will either of them be able to cope with the consequences?

Jessi’s first book, Moonglass, was just an okay read for me, so I wasn’t expecting much going into this one. Good thing, because this was actually worse than Moonglass. In Honor is a contemporary romance that had less than likable characters and a romance that lacked any sparks.

The two main characters, Honor and Rusty were neither likable nor relatable.

Honor spends most of the book acting like a child or crying about something. She is always blaming others for her problems and never takes responsibility for herself.

As for Rusty, he is pretty much an alcoholic at the ripe old age of 18. He’s talked about as if he’s this drop-dead gorgeous heartbreaker, which I couldn’t understand because there wasn’t a single thing about him that I liked. His humor reminded me a lot of Tim Riggins from Friday Night Lights, only less likable.

What really bothered me about this book were the parts that were extremely unbelievable. Would you really go scuba diving in the middle of the night with someone you’ve known for less than 24 hours? No. At least I wouldn’t. It was these types of scenarios along the way that made the whole road trip seem absurd.

The plot, the characters, it was all just so-so.