Book Review: What My Mother Doesn't Know by Sonya Sones 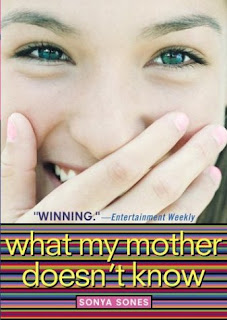 My name is Sophie.
This book is about me.
It tells
the heart-stoppingly riveting story
of my first love.
And also of my second.
And, okay, my third love too.

It's not that I'm boy crazy.
It's just that even though
I'm almost fifteen
it's like
my mind
and my body
and my heart
just don't seem to be able to agree
on anything.

I started one of Sones’ books in the past and didn’t even bother finishing it, but I’ve been hearing so many good things about her lately that I decided to give her another shot.

This time I picked up a copy of What My Mother Doesn’t Know and once again I was disappointed. I wouldn’t have even bothered finishing if it weren’t for the fact that I was trapped at work for seven more hours with no other source of entertainment.

Contrary to the blurb on the back of the book, Sophie IS boy crazy! She goes through three different guys in this short book, and whenever she’s not with one she’s dreaming about one. Heck, even when she has a boyfriend she’s dreaming of a different guy! I disliked Sophie from the very beginning, I found her immature, shallow and annoying. Her entire brain was about making out with boys and nothing more.

I didn’t feel like this book had a plot line at all. It basically just followed Sophie around during her dating escapades. At one point during the story Sophie considers breaking up with her “then” boyfriend rather than telling her best friends who he was because she was afraid they’d make fun of her. This just proved to me how shallow she really was; if you can’t even tell your so called “best friends” who you’re dating for fear they’ll make fun of you instead of be happy for you, then maybe they’re not really true friends.

While reading at work my co-worker looked over at me and said wow, you’re really not liking that book are you? Apparently I had quite the grimace on my face. It was while I was reading an awkward passage about girls popping each other’s zits at a sleepover (GROSS!) There were a lot of awkward passages like this scattered throughout the story.

Overall, I was unable to understand people’s interest in Sones’ books and did not find it worth my time. I won’t be reading anything more from this author.
Posted by Born Bookish at 9:48 AM