Book Review: What She Left Behind by Tracy Bilen 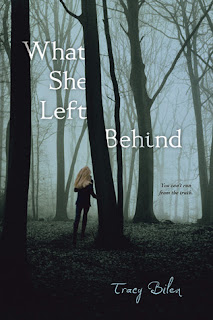 In this suspenseful thriller, Sara and her mother are going to secretly escape her abusive father—when her mother mysteriously disappears.

Sara and her mom have a plan to finally escape Sara’s abusive father. But when her mom doesn’t show up as expected, Sara’s terrified. Her father says that she’s on a business trip, but Sara knows he’s lying. Her mom is missing—and her dad had something to do with it.

With each day that passes, Sara’s more on edge. Her friends know that something’s wrong, but she won’t endanger anyone else with her secret. And with her dad growing increasingly violent, Sara must figure out what happened to her mom before it’s too late…for them both.

What She Left Behind exceeded my every expectation. I hadn’t heard much about it beforehand, but after seeing the eerie cover I knew I had to read it, and I’m so glad I did.

The book centers around Sara, a shy, soft-spoken girl who’s just trying to cope with her new life. Before Sara’s family moved from Philly they were one big happy family, her mom, dad, and older brother, Matt. That all changed when they moved to the small town of Scottsfield, Michigan and Matt commited suicide. Ever since then her father has become abusive, taking out his anger on Sara’s mother, blaming her for what happened to their son.

Each chapter is categorized by a day of the week. I liked this idea, it helped me to keep track of things. One of the other things I thought was neat, was how all of Sara’s writing assignments for this one class were included. Through these writing assignments we learn more about Sara’s past and the relationship between her and her brother, Matt. I felt like it was a creative way for us to learn more and get a better understanding of Sara.

The tension in this book was incredible! I was on high alert the whole time, looking over my shoulder, jumping and gasping from shock. The author did such an amazing job creating real, three-dimensional characters. The struggles that Sara is going through and how she deals with them seemed completely realistic for a girl in her situation. The dad was absolutely terrifying, like you got the chills whenever he showed up kind of thing.

Here’s a teaser quote that will make your skin crawl:

“My heart pounding, I make my way down the hallway to my parent’s room and turn on the light.
I stifle a scream. My dad is sitting on the bed, fully clothed, and completely awake. In the dark.
‘I didn’t think anyone was home,’ I say.
My dad just stares. I’m used to his silence by now, but this is excruciating.
‘Your mom’s gone,’ he says matter-of-factly.”

Bilen creates this incredibly realistic picture of an abusive relationship, as well as a heart-pounding mystery and a budding romance. This book has it all folks.
Posted by Born Bookish at 4:52 PM