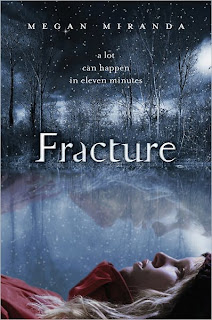 Eleven minutes passed before Delaney Maxwell was pulled from the icy waters of a Maine lake by her best friend Decker Phillips. By then her heart had stopped beating. Her brain had stopped working. She was dead. And yet she somehow defied medical precedent to come back seemingly fine

—despite the scans that showed significant brain damage. Everyone wants Delaney to be all right, but she knows she's far from normal. Pulled by strange sensations she can't control or explain, Delaney finds herself drawn to the dying. Is her altered brain now predicting death, or causing it?

Then Delaney meets Troy Varga, who recently emerged from a coma with similar abilities. At first she's reassured to find someone who understands the strangeness of her new existence, but Delaney soon discovers that Troy's motives aren't quite what she thought. Is their gift a miracle, a freak of nature-or something much more frightening?

Megan Miranda writes an eerie and thrilling debut! This book surprised me in a lot of different ways, all of which were good. It was a lot more on the suspense/thriller side of things than I expected. I haven’t read a book like this in a long time. The pacing was perfect, there was never a dull moment. Each heart-pounding minute was wonderful. I was able to guess the big shocker before it happened, which was too bad but I still felt Delaney’s shock along with her when she found out.

The book is from Delaney’s POV, the character who pretty much drove me crazy. She kept all of her feelings bottled up inside and never said what she wanted to. She also made a lot of stupid decisions. Like going home with Troy after she had only spoken to him twice ever. “Oh you want to take me home to your apartment?” “Okay why not.” I mean seriously?!

Troy was beyond creepy. He freaked me out from the first moment he entered the picture. He was basically stalking Delaney but she just ignored it and hung out with him anyway.

Decker was super sweet. You could tell how much he cared for Delaney from the get go. He risked his life to save her, waited by her bedside everyday, and then sobbed when she woke up.

The romance and relationships in this book were really frustrating. Decker & Delaney both have feelings for each other but neither one of them wants to admit it. In the meantime they both went around seeing other people. Agh! So annoying.

Every book you read now-a days is part of a trilogy or some other number of books. It was so refreshing to read a book where the story actually wrapped up with a satisfying ending. I look forward to seeing more books from this author!

"If you had one day left to live, what would YOU do?"