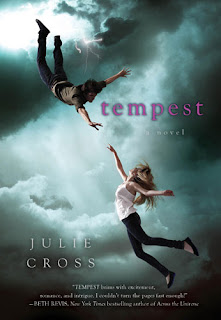 Title: Tempest
Author: Julie Cross
# Of Pages: 352
Publisher: St. Martin’s Griffin
Publication Date: January 17, 2012
Level: Young Adult
Rating: 4 Hearts
Synopsis
(From Amazon.com)
The year is 2009.  Nineteen-year-old Jackson Meyer is a normal guy… he’s in college, has a girlfriend… and he can travel back through time. But it’s not like the movies – nothing changes in the present after his jumps, there’s no space-time continuum issues or broken flux capacitors – it’s just harmless fun.
That is… until the day strangers burst in on Jackson and his girlfriend, Holly, and during a struggle with Jackson, Holly is fatally shot. In his panic, Jackson jumps back two years to 2007, but this is not like his previous time jumps. Now he’s stuck in 2007 and can’t get back to the future.
Desperate to somehow return to 2009 to save Holly but unable to return to his rightful year, Jackson settles into 2007 and learns what he can about his abilities.
But it’s not long before the people who shot Holly in 2009 come looking for Jackson in the past, and these “Enemies of Time” will stop at nothing to recruit this powerful young time-traveler.  Recruit… or kill him. Piecing together the clues about his father, the Enemies of Time, and himself, Jackson must decide how far he’s willing to go to save Holly… and possibly the entire world.
My Verdict
Okay, so I did really enjoy the storyline of this book. I’ve come to realize lately how much I enjoy books about time travel. It’s also interesting to see all the different approaches authors come up with in dealing with the same basic idea.
In this book the main character, nineteen-year-old Jackson can jump through time. He can only jump to the past and only for short amounts of time. That is until he jumps two years into the past and can’t get back. He has no other choice but to pretend this is his rightful time and just try and learn everything he can about what’s happening.
There are three main characters in this book: Jackson, Holly, and Adam.
-Jackson was a pretty good main character; he’s smart, caring, and charming. What’s not to like, right?  For some reason I just didn’t fall in love with him the way other readers have.
-Holly is Jackson’s girlfriend, and honestly, I felt bad for her most of the time. She has no clue who Jackson really is or what he can do. He’s always hiding things from her and lying to her and for what? I never really understood why he didn’t just tell her. It wasn’t because he was trying to keep her safe or anything because at the beginning he doesn’t even know there is any danger. Holly soon becomes a target to his enemies because of their relationship even though she’s clueless as to what’s happening. I just felt like she was an innocent bystander who kept getting caught up in all of Jackson’s crap.
- Adam was my favorite character. Holly’s friend and Jacksons’ right hand man. Adam knows all about Jackson and what he can do and the two of them are working together to try and figure things out. Adam is a super smart, computer geek, with a big heart and lovable personality.
I was just talking to a friend about the lack of books out there that have college-age main characters. Being in college myself, I would like to see more books centered on this age group. So when I heard this book was about college-aged characters I was excited.
Unfortunately, in this instance this basically just meant that there was more swearing and sexual content than in most young adult books. I would say this book was meant
for an older audience (18+) than what it’s being marketed for.
Tempest is the first book in a new trilogy, one that I will definitely continue to read.


BONUS CONTENT:
Thanks to the lovely folks over at Macmillion Audio I am happy to share with you a clip from the Tempest audiobook! Check it out!