Book Review: May B by Caroline Starr Rose 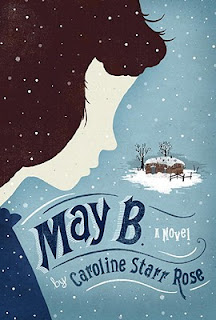 Title: May B
Author: Caroline Starr Rose
# Of Pages: 240
Publisher: Schwartz & Wade
Publication Date: January 10, 2012
Level: Middle Grade
Rating: 5 Hearts
Synopsis
(From Amazon.com)
I've known it since last night:
It's been too long to expect them to return.
Something's happened.
May is helping out on a neighbor's Kansas prairie homestead—just until Christmas, says Pa. She wants to contribute, but it's hard to be separated from her family by 15 long, unfamiliar miles. Then the unthinkable happens: May is abandoned. Trapped in a tiny snow-covered sod house, isolated from family and neighbors, May must prepare for the oncoming winter. While fighting to survive, May's memories of her struggles with reading at school come back to haunt her. But she's determined to find her way home again. Caroline Starr Rose's fast-paced novel, written in beautiful and riveting verse, gives readers a strong new heroine to love.
My Verdict
This is a lovely debut novel told in free verse by Catherine Starr Rose and hopefully just the beginning of what is to come.
The story is about a young girl named May who is shipped off to a neighbor’s house to take care of the homestead and earn her family some extra money. After some unexpected events, May is left all alone in the house fighting to survive on her own.
We learn at the beginning about May’s dreams to become a schoolteacher, we also learn about the difficulties she has in reading. This struggle is something that haunts May and makes her feel like less than she is. While she is left alone for months on end, May spends a lot of that time dwelling on the past, on her mean old teacher who humiliated her in front of her classmates and told her she wasn’t smart enough, and the taunting voices of her schoolmates making fun of her after she messed up her reading. You can see how much these things have hurt and discouraged her.  Until one day she decides to leave the past in the past.
This is not only a journey of survival but also a journey of self-discovery as May learns the very important lesson that other people don’t define her. The only one that can define her is she herself.
A beautiful story of a young girl who finds herself, her voice, and her dreams in the most unlikely of circumstances. A definite must read of 2012!
Posted by Born Bookish at 4:02 PM