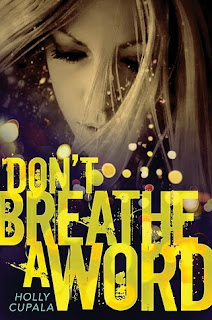 Title: Don’t Breathe A Word
Author: Holly Cupala
# Of Pages: 320
Publisher: Harper Teen
Publication Date: January 3, 2012
Level: Young Adult
Rating: 3 Hearts
Synopsis
(From Amazon.com)
Joy Delamere is suffocating.
From asthma, from her parents, and from her boyfriend, Asher, who is smothering her from the inside out. She can take his cruel words, his tender words . . . until the night they go too far.
To escape, Joy sacrifices her suburban life to find the one who offered his help, a homeless boy called Creed. He introduces her to a world of fierce loyalty, to its rules of survival, and to love—a world she won’t easily let go.
Set against the backdrop of the streets of Seattle, Holly Cupala’s powerful new novel explores the subtleties of abuse, the secrets we keep, and the ways to redemption. But above all, it is an unflinching story about the extraordinary lengths one girl will go to discover her own strength.
My Verdict
This was quite an intense book! I enjoyed it but also found it to be emotionally upsetting. I tried reading a little before bed one night. Not a good idea. Small doses during the day turned out to be the better route, for me anyway.
The story is about Joy who has severe asthma and has almost died from it more than once. Her family has become so protective of her, never letting her out of their sight, they don’t realize that they are the ones who are suffocating her. Joy’s boyfriend Asher is rich, good looking, seemingly sweet, the perfect boyfriend, on the outside at least. Nobody knows the real Asher, the one who abuses Joy in more way than one, the one controlling her every move, her every breathe.
Finally when things go too far, Joy decides there is no other way to escape then to run away. She runs to the streets of Seattle, which serve as home to thousands of homeless adults and teens.
I wanted to wrap Joy in a huge hug and tell her that everything would be okay! I hated that she put up with Asher and all his abuse for so long. I wanted her to tell someone! But I understood why she couldn’t.
Once on the streets, Joy finds her place with three other teens: Creed, Santos, and May, who live together in an abandoned house. They take her in, accept her as part of their family, and teach her how to survive on the street. All three of them were such great characters, that I immediately fell in love with them all.
I can’t get over how well written Asher’s character was. He was absolutely revolting; I wanted to both punch him and puke all at once. The terror that he used to control Joy completely jumped off the page and scared the crap out of me.
I thought the story was very well written and I really liked how it was set up. We slowly learn about Joy & Asher’s relationship through flashback chapters. This added a sense of suspense and mystery to the story, and it also helped it from being too overpowering. I think if all the chapters about her and Asher were all at the beginning I would never have kept reading. It would have been too much to handle.
As for objectionable content, there was quite a lot of swearing especially the f bomb. There were some sexual things that were referenced but never described in detail. Lastly, there were a few instances of violence and blood, mostly not bad except for one instance that was a little graphic.
I think what made reading this book so hard, was knowing that this stuff really goes on everyday. It serves as a great tool in bringing attention to the world of teen homelessness. It definitely pulls on your heart and makes you want to do something to help.
Posted by Born Bookish at 9:52 AM