Review: Inside Out & Back Again by Thanhha Lai 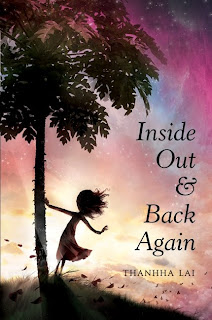 Title: Inside Out & Back Again
Author: Thanhha Lai
# Of Pages: 272
Publisher: HarperCollins
Publication Date: February 22, 2011
Level: Middle Grade
Rating: 4 Hearts
Synopsis
(From Amazon.com)
No one would believe me but at times I would choose wartime in Saigon over peacetime in Alabama.
For all the ten years of her life, HÀ has only known Saigon: the thrills of its markets, the joy of its traditions, the warmth of her friends close by . . . and the beauty of her very own papaya tree.
But now the Vietnam War has reached her home. HÀ and her family are forced to flee as Saigon falls, and they board a ship headed toward hope. In America, HÀ discovers the foreign world of Alabama: the coldness of its strangers, the dullness of its food, the strange shape of its landscape . . . and the strength of her very own family.
This is the moving story of one girl's year of change, dreams, grief, and healing as she journeys from one country to another, one life to the next.
My Verdict
This is a touching story about the journey of a ten year-old girl named Ha, and her family as they deal with the affects of war and the changes it brings to their lives.
The story is actually based on author Thanhha Lai’s real life experiences as a child.
Told in free verse and divided into four main sections the story flowed seamlessly from one part to the next.
This book focuses on Ha and her family (her three brother and her mother) who flee from Vietnam during the war and end up living in Alabama where they are forced to start over. When Ha starts at a new school where nobody understands her and talks to her like she’s dumb, we get to see the frustration of dealing with a language barrier. We also get to see the power of friendship, which doesn’t always need words.
Ha was one tough cookie for ten years old. She was strong willed and full of emotion, she was spunky, funny, and able to bring humor to some hard situations.
The one thing I found hard to follow was the brothers’ names: Quang, Vu, and Khoi. For some reason I couldn’t keep them straight and didn’t know who was being talked about, until I learned to identify them by personality rather than name.
This was a quick read that took just a little over an hour from start to finish. For such a short book it sure is full of love, life, and loss. I highly recommend you pick it up! I’ll be on the lookout for anything more written by Thanhha in the future.
Posted by Born Bookish at 1:05 PM