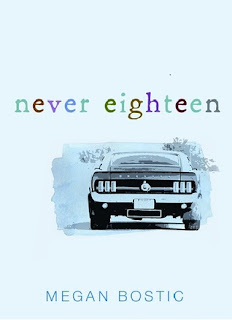 Title: Never Eighteen
Author: Megan Bostic
# Of Pages: 204
Publisher: Graphia
Publication Date: January 17, 2012
Level: Young Adult
Rating: 3 Hearts
Synopsis
(From Amazon.com)
Austin Parker is on a journey to bring truth, beauty, and meaning to his life.
Austin Parker is never going to see his eighteenth birthday. At the rate he’s going, he probably won’t even see the end of the year. The doctors say his chances of surviving are slim to none even with treatment, so he’s decided it’s time to let go.
But before he goes, Austin wants to mend the broken fences in his life. So with the help of his best friend, Kaylee, Austin visits every person in his life who touched him in a special way. He journeys to places he’s loved and those he’s never seen. And what starts as a way to say goodbye turns into a personal journey that brings love, acceptance, and meaning to Austin’s life.
My Verdict
Before I read the book, I had heard a lot about it and once I started reading I was surprised when I seemed to know some things that I wasn’t supposed to until the end.
The story is told from Austin’s point of view, which is the only view that would have made sense in this case, because even though Kaylee is with Austin on his journey she spends most of the time sitting in the car.
I loved Austin’s enthusiasm and love for life. Even though he knows he doesn’t have much time left he spends the time that he does have living it to the fullest and striving to make an impact while he still can.
I found it unrealistic that Austin had a friend going through every single hardship you could imagine. Out of all my friends none of them are going through any issues like that so it just seemed a little cliché that everyone he knew was dealing with some big issue.
One of the things I really liked was how you see all the different little stories come together in the end. As Austin goes on his journey meeting with so many different people I was wondering if any of them would play a part later on.
I couldn’t believe how little this book was. Not only were there only 204 pages, but they were tiny pages! I blew right through it in a matter of a few hours.
While I liked the underlying storyline of the book I found myself wishing that the author had beefed it up a bit. It felt like just bones and no meat. Everything was very direct and to the point, with no room for fluff. Another downfall to the shortness of the story was that I didn’t feel particularly close or connected with any of the characters, which is always disappointing. Language is always another big point with me and unfortunately, there was quite a bit of swearing in this one, including a handful of F words.
This is awful, but in the end I didn’t even shed a single tear.
Posted by Born Bookish at 4:07 PM