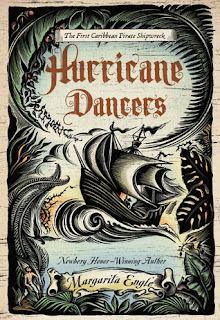 Quebrado has been traded from pirate ship to ship in the Caribbean Sea for as long as he can remember. The sailors he toils under call him el quebrado—half islander, half outsider, a broken one. Now the pirate captain Bernardino de Talavera uses Quebrado as a translator to help navigate the worlds and words between his mother’s Taíno Indian language and his father’s Spanish.

But when a hurricane sinks the ship and most of its crew, it is Quebrado who escapes to safety. He learns how to live on land again, among people who treat him well. And it is he who must decide the fate of his former captors.

The book starts out with a brief historical setting and list of main characters. With a historical fiction book I like when the author includes some sort of background on which they drew their ideas from. I also found the cast list to be very helpful since there were five main characters, all with complicated names.

“Sailors call me a boy
of broken dreams,
but I think of myself
as a place—a strange place
dreamed by the sea,
belonging nowhere,
half floating island
and half
wandering wind.”

“I once owned a vast land grant
with hundreds of naturals,
Indian slaves who perished
From toil, hunger and plagues.
Crops withered, mines failed.
All my dreams of wealth vanished.”

“There were days when my sword
killed ten thousand.

Now, all those dead spirits haunt me,
and I am the one on a ship
in chains.”

“Everyone calls me River Being
because I catch so many fish
with my feathered arrows
and winged spears.

“When Narido is close,
my mind swoops
and tumbles
like the wind
in a stormy sky.”

I was quite disappointed in this book having read it right after Engle’s other MG book, The Firefly Letters, which really captured my heart. This time around I found the story lacking any emotional depth, I just didn’t connect with the story or any of the five main characters.
Posted by Born Bookish at 7:04 PM