Book Review: I'll Be There by Holly Goldberg Sloan 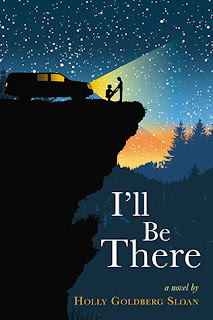 Sam Border wishes he could escape. Raised by an unstable father, he's spent his life moving from place to place. But he could never abandon his little brother, Riddle.

Riddle Border doesn't talk much. Instead, he draws pictures of the insides of things and waits for the day when the outsides of things will make sense. He worships his older brother. But how can they leave when there's nowhere to go? Then everything changes. Because Sam meets Emily.

Emily Bell believes in destiny. She sings for her church choir, though she doesn't have a particularly good voice. Nothing, she feels, is mere coincidence. And she's singing at the moment she first sees Sam.

Everyone whose path you cross in life has the power to change you--sometimes in small ways, and sometimes in ways greater than you could have ever known. Beautifully written and emotionally profound, Holly Goldberg Sloan's debut novel deftly explores the idea of human connection.

The word that comes to mind when trying to describe this book would be different, and maybe even a bit strange.

Main characters Emily and Sam cross paths one day when Sam walks into a new church, where he sees Emily sing, directly to him. After this the two share a brief conversation (if you could call “Hey” and “Hi” a conversation) anyways the two supposedly “connect” during this moment before Emily turns around and hurls into the bushes, and Sam runs away.

After this, Sam’s thoughts are consumed by Emily, and Emily is consumed with finding Sam. This is where the story lost me, I didn’t really understand their whole connection to one another, and if a whole book is going to be about this couple that can’t live without each other than understanding what draws them together is very important.

The story was written in a way I’ve never come across before in YA literature. I believe it is called third-person subjective, which is when the narrator conveys the thoughts, feelings, opinions, etc. of one or more characters. In this case it was over a dozen characters. At first I didn’t mind this style, but by the end of the book the author had us going into the minds of every little side character, which got to be annoying.

Overall, while the story wasn’t great, I did enjoy it. My biggest complaint would be the length. There were plenty of parts that weren’t necessary to the story that I think should have been cut to help whittle it down from it’s beastly total of 400 pages.
Posted by Born Bookish at 8:47 AM