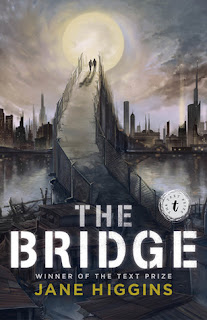 The City is divided. The bridges gated. In Southside, the hostiles live in squalor and desperation, waiting for a chance to overrun the residents of Cityside.

Nik is still in high school but is destined for a great career with the Internal Security and Intelligence Services, the brains behind the war. But when ISIS comes recruiting, everyone is shocked when he isn't chosen. There must be an explanation, but no one will talk about it. Then the school is bombed and the hostiles take the bridges. Buildings are burning, kids are dead, and the hostiles have kidnapped Sol. Now ISIS is hunting for Nik.
But Nik is on the run, with Sol's sister Fyffe and ISIS hot on their trail. They cross the bridge in search of Sol, and Nik finds answers to questions he had never dared to ask.

I don’t really have any strong feelings about this book. I mostly feel indifferent.

The book is told from the perspective of main character, Nik, whom I thought was a girl for the first few pages before it told me otherwise. I didn’t dislike Nik, he was a good person who kept getting into trouble for nothing which made me mad; I felt so bad for him. My favorite character, however, was Fyffe, she was so brave in the face of danger, and willing to do whatever it took to get her brother back. The character names were all really original which I loved: Dash, Jono, Fyffe, Sol, Jeitan, Levkova, Coly, Lanya. I really loved Levkova, it was just fun to say.

The world building is a big thing in dystopian fiction. I find it really has the power to either make or break a book. While the war-torn City divided into Southside and Cityside is well described visually and easy to imagine yourself in, the politics behind it became really confusing to me, especially near the end.

There is a lot of action to keep you turning pages and the ongoing search for Sol that keeps you interested. I was both happy and upset with the ending but you can’t always get the best of both worlds I suppose. I’m not really sure if this is a standalone novel or the beginning of a series? It works perfectly fine as a standalone but I could also see it going further.
Posted by Born Bookish at 7:41 PM