Welcome back to day two of Defy the Stars Book Weekend, thanks for coming back =)
Yesterday we started with a book review and today we have an interview with the lovely author herself, Stephanie Parent. 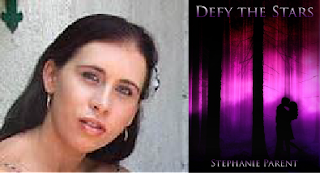 Born Bookish: Defy the Stars is a retelling of Romeo & Juliet, what made you want to reinvent this story?

I had written a previous novel in verse and received feedback from editors that it wasn’t “edgy” or dramatic enough for today’s YA market, so I knew I needed to go further in my next novel. Someone in the publishing industry actually suggested the idea of a modern Romeo and Juliet story involving drug addiction. At first I wasn’t sure about it, but then I reread the play and was struck by how well the “poison” in the original play correlated with modern drug use. I was also frustrated with several recent YA books that I think portray Romeo and Juliet in an overly simple, one-sided way, and I wanted to explore Shakespeare’s work in a deeper way.

Born Bookish: Did you read many novels in-verse to prepare yourself to write one of your own?

I didn’t specifically read verse novels in preparation for this one, but I’ve been reading verse novels for many years before I attempted to write one. In fact, I would like to read every YA verse novel ever published if that were possible!

Born Bookish: What is your favorite novel in-verse?

It’s so hard to pick! One absolutely amazing, completely original verse novel I have to mention is Martine Leavitt’s My Book of Life by Angel. This is the gritty, uncompromising story of a teenage prostitute on the streets of Vancouver, and the author was inspired by the real-life disappearance of a number of prostitutes in the Vancouver area. The poetry format works perfectly to illustrate Angel’s broken psyche and her broken world, and Leavitt works in excerpts and themes from Paradise Lost to stunning effect.

Another verse novel I really love, which I think definitely deserves more recognition, is Dead on Town Line by Leslie Connor. At less than 10000 words, this book is short even by verse standards, but the author manages to tell a complete, moving, satisfying story that somehow feels more like a novel than a short story or novella. Sort of a YA version of The Lovely Bones, this book is dark and sad, yet ultimately hopeful.

On a lighter note, I absolutely love Sonya Sones’ companion verse novels, What My Mother Doesn’t Know and What My Girlfriend Doesn’t Know. Sones is one of those authors who just makes it look so easy—her verse is deceptively simple but so clever, elegant and charming, it will definitely leave a smile on your face.

I think a lot of people develop a fear of poetry in high school and/or college English classes and never really outgrow it! I completely understand this, because there are plenty of poems I’ll NEVER understand no matter how much time I spend analyzing them. In addition, some people hear “verse” and assume a verse novel will be a series of poems, perhaps confusing and overly metaphorical, without a clear and overarching narrative. The truth is, many verse novels are quick and easy to read and perfect for reluctant readers, since they contain so few words per page and cut to the emotional core.

Born Bookish: Can you tell us a little bit about your writing process? Do you make yourself write a certain number of words a day etc.?

I really don’t enjoy—in fact, I pretty much dread—the actual writing process, so I usually don’t force myself to write a certain number of words a day, and I have a lot of weird little rituals to help me write. I actually like to write with a TV show on in the background of my computer! It has to be a show I’ve watched before so I’m not too distracted, but having that extra noise rather than the gaping silence really helps me. Oddly enough, though, I can’t listen to music while writing, especially music with lyrics—I find that too distracting. I also like to give myself permission to take frequent breaks and surf the net while writing. It means the process takes longer, but it preserves my sanity a bit!

Julia, since in many ways she’s similar to who I was as a teenager—I was also a fairly serious piano player and a bit of a perfectionist and workaholic.

Born Bookish: If you could be one of your characters, who would you be?

Honestly, since Defy the Stars is a pretty depressing story, I’m not sure I’d want to be any of the characters! Probably Julia, because it might be worth the pain she goes through to experience that kind of love.

Born Bookish: Piano plays a big part of Julia’s life, do you play piano yourself or was it just something that interested you?

I actually do play the piano—although not nearly as well as Julia does! I went to a performing arts high school, The Baltimore School for the Arts, as a classical piano major, and I also took private lessons at the Peabody Preparatory, the pre-college branch of the Peabody music conservatory that Julia applies to in the novel. However, I was never too interested in or dedicated to the technical aspects of playing, and I knew I didn’t have the drive to pursue it as a career. I definitely couldn’t play the third movement of Beethoven’s Moonlight Sonata that Julia tackles in the novel!

Born Bookish: Both of the main characters in your book are musicians, did you listen to music while writing? If so what was the main song that inspired you?

I have a hard time writing to music, especially music with lyrics, but I did listen to a lot of classical piano music while writing the book. One piece I listened to over and over is Beethoven’s Moonlight Sonata—you’ll see why if you read the book! A few more modern songs I was also inspired by are “1979” by The Smashing Pumpkins and “Your Decision” by Alice in Chains.

Born Bookish: What was your favorite children’s book growing up?

So many, but if I had to choose one, Bridge to Terabithia by Katherine Paterson. One of my most vivid childhood memories is sitting on the stairs and sobbing my heart out while reading the last few pages of that book. It really showed me just what an emotionally intense experience reading can be.

I have a shorter novel called Forty Days coming out in February—it’s actually the first installment in a two-part story, a YA retelling of Noah’s ark from the point of view of Noah’s sixteen-year-old granddaughter, Neima. Then in May I’m releasing a New Adult romance titled Precious Things, about a girl who has to switch from her chosen university to a community college at the last minute, and the intriguing people she meets there (including a hot guy, of course!). Then in late summer or early fall I’ll have Forty Nights, the second half of the Noah’s ark story.

I really love the covers of most of Francesca Lia Block’s books, which are designed by the amazing photographer and visual artist Suza Scalora. I think my favorite is the cover for I Was a Teenage Fairy.


Thanks so much for the interview Stephanie!!!
Posted by Born Bookish at 7:45 AM