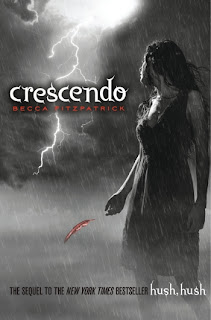 Title: Crescendo
Author: Becca Fitzpatrick
# Of Pages: 432
Publisher: Simon & Schuster
Publication Date: October 9, 2010
Level: Young Adult
Rating: 5 Hearts
Synopsis
(From Amazon.com)
The sequel to the New York Times Best selling phenomenon, Hush, Hush!
Nora should have known her life was far from perfect. Despite starting a relationship with her guardian angel, Patch (who, title aside, can be described as anything but angelic), and surviving an attempt on her life, things are not looking up. Patch is starting to pull away and Nora can't figure out if it's for her best interest or if his interest has shifted to her arch-enemy Marcie Millar. Not to mention that Nora is haunted by images of her father and she becomes obsessed with finding out what really happened to him that night he left for Portland and never came home.
The farther Nora delves into the mystery of her father's death, the more she comes to question if her Nephilim blood line has something to do with it as well as why she seems to be in danger more than the average girl. Since Patch isn't answering her questions and seems to be standing in her way, she has to start finding the answers on her own. Relying too heavily on the fact that she has a guardian angel puts Nora at risk again and again. But can she really count on Patch or is he hiding secrets darker than she can even imagine?
My Verdict
OH MY GOSH!! I cannot even begin to explain to you how intense this book was!
I found the first three-quarters of the book to be infuriating! Everything kept going wrong and Marcie was just so annoying. I hated what was happening but at the same time I couldn’t stop reading. Then the ending was mind blowing! Unbelievably Awesome! I NEED the next book this instant. If it weren’t 12:30 am I would be going to the store right now! Heck maybe I’ll go bang down the door!!
In the first book I had no problems with Nora, she was a great main character who I really liked, but this time she drove me crazy! Almost every decision she made was stupid and reckless. I wanted to slap her and say “WHAT ARE YOU DOING?!”
This installment focuses on the past, as Nora looks into her father’s murder. Everything you thought you knew about the characters is questioned. You start to suspect everyone and anyone, not knowing who to trust and who is lying. SOO much happens in this book.
We got a sneak peek into the past of the angels and nephilim in the first book but this one really dives in and we learn a lot more about them and their past history.
All I have to say is that Becca Fitzpatrick is an amazing author! I can’t wait to see what she has in store for Nora, Vee, Patch, and the rest of the characters in the next books. If I’ve learned anything from the first two books it’s that there won’t be a single dull moment.
Posted by Born Bookish at 4:34 PM