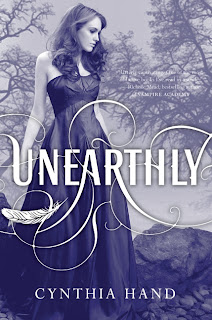 In the beginning, there's a boy standing in the trees . . . .
Clara Gardner has recently learned that she's part angel. Having angel blood run through her veins not only makes her smarter, stronger, and faster than humans (a word, she realizes, that no longer applies to her), but it means she has a purpose, something she was put on this earth to do. Figuring out what that is, though, isn't easy.
Her visions of a raging forest fire and an alluring stranger lead her to a new school in a new town. When she meets Christian, who turns out to be the boy of her dreams (literally), everything seems to fall into place—and out of place at the same time. Because there's another guy, Tucker, who appeals to Clara's less angelic side.
As Clara tries to find her way in a world she no longer understands, she encounters unseen dangers and choices she never thought she'd have to make—between honesty and deceit, love and duty, good and evil. When the fire from her vision finally ignites, will Clara be ready to face her destiny?

I’ve been on a bit of a fallen angel kick lately with the Hush, Hush saga and now this. I just heard about this book not to long ago and I thought it sounded good, I added it to my TBR but there was no rush. Then I got a kindle. YAY! And this book was only 99 cents so of course I had to by it. Once I started reading it was love at first page. This book was absolutely perfect! There wasn’t a single thing I didn’t like about it.

Lets talk about the amazing characters that make up this book:

-Clara was a great main character! Usually the main character will grate on my nerves at one point or another throughout a story but not Clara. She didn’t make a single decision I didn’t agree with and love her for. There were a few instances where she had to make some huge and I mean HUGE decisions and this is normally where the character does something that makes you want to scream or slap them but Clara surprised me every time by making the decisions I was hoping she would.

-       Christian is perfect. He’s sweet, funny, extremely handsome, the guy every girl at Jackson Hole High is in love with. Usually the good-looking popular guy turns out to be a jerk in the end, but not Christian he truly is a great guy.

-       But then there’s Tucker… Tucker stole the show and my heart the minute he walked into the school cafeteria and called Clara “Carrots.” Tucker is a true Wyoming cowboy and outdoorsman. Skiing, hiking, fishing, white water rafting, horseback riding. There’s nothing he can’t do.

-       Angela is one of Clara’s best friends. At first I was skeptical of Angela. I wasn’t sure if I trusted her or not but she’s always there when Clara needs her and proves herself to be a really great friend.

I knew there was a second book when I went into this and was expecting a cliffhanger ending but don’t worry there are none of those here. The ending is satisfying in itself but also leaves enough open that I’m itching to start the next book, Hallowed.

When I was researching the book, sequel, and author after I had finished, I stumbled across a blog post where the author announced that the CW is working on writing a script in hopes of making Unearthly into a TV series. Ahhhh! I got so excited when I read this. I can’t wait to see who they cast! =)
Posted by Born Bookish at 1:24 PM