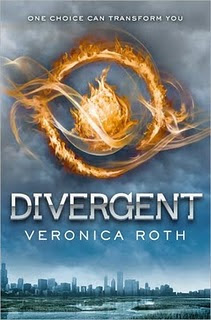 Title: Divergent
Author: Veronica Roth
# Of Pages: 496
Publisher: Katherine Tegen Books
Publication Date: May 3, 2011
Level: Young Adult
Rating:  4 Hearts
Synopsis
(From Barnes&Noble.com)
In Beatrice Prior’s dystopian Chicago, society is divided into five factions, each dedicated to the cultivation of a particular virtue-Candor (the honest), Abnegation (the selfless), Dauntless (the brave), Amity (the peaceful), and Erudite (the intelligent). On an appointed day of every year, all sixteen-year-olds must select the faction to which they will devote the rest of their lives. For Beatrice, the decision is between staying with her family and being who she really is- she can’t have both. So she makes a choice that surprises everyone, including herself.
During the highly competitive initiation that follows, Beatrice renames herself Tris and struggles to determine who her friends really are- and where, exactly, a romance with a sometimes fascinating, sometimes infuriating boy fits into the life she’s chosen. But Tris also has a secret, one she’s kept hidden from everyone because she’s been warned it can mean death. And as she discovers a growing conflict that threatens to unravel her seemingly perfect society, she also learns that her secret might help her save those she loves… or it might destroy her.
My Verdict
I really didn’t care for the way this story started. I found the beginning to be confusing and very slow. The beginning just dives into the characters daily lives, which was really confusing. Also, Tris describes the different people and their lifestyles in the different factions right off the bat. Which I can understand wanting people to get to know what this new world is like but it didn’t mean anything to me because I didn’t have any experiences with those people yet. Once I got farther into the story I found myself constantly flipping trying to figure out who stood for what. It took me quite a while before I got into the story and got all the different factions down.
On a positive note, the author did such a great job in developing the characters! They all had very strong personalities whether good or bad. I fell in love with the good and absolutely despised the bad. I got so emotionally attached to them, which doesn’t always happen. Tris has a strong head on her shoulder and is an incredibly strong, brave, and courageous, heroine. She wasn’t always that way, which was another thing I liked about her. You get to watch her evolve from the self-conscious, nervous girl she is at the beginning to the independent, self assured young lady she is by the end.
There is also a nice touch of romance here. I don’t want to say too much and spoil anything so I will just say that there is a nice romantic aspect to the story but it is not one that overpowers everything else. It is just a small piece of the puzzle in this case.
There was a good amount of violence in this book, some pretty gruesome. I’m usually pretty squeamish when it comes to violence (The Hunger Games being my biggest exception). There is at least one incident that horrified me so much that I had to stop reading for the rest of the day as I debated whether or not I should finish at all, because at that point I was scared of what else might happen next. I think everyone should have a fair warning of this beforehand since I know I will not be forgetting that incident anytime soon, no matter how hard I try.
Overall I did enjoy this book despite the fact that it may or may not have scarred me for life. Sigh... I did, however, knock the rating down from five hearts to four because of this fact.
Posted by Born Bookish at 2:13 PM