Book Review: A Need So Beautiful by Suzanne Young 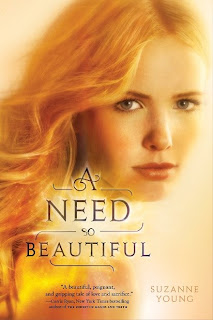 We all want to be remembered. Charlotte’s destiny is to be forgotten.

Charlotte’s best friend thinks Charlotte might be psychic. Her boyfriend thinks she’s cheating on him. But Charlotte knows what’s really wrong: She is one of the Forgotten, a kind of angel on earth who feels the Need- a powerful, uncontrollable draw to help someone, usually a stranger.

But Charlotte never wanted this responsibility. What she wants is to help her best friend, whose life is spiraling out of control. She wants to lie in her boyfriend’s arms forever. But as the Need grows stronger, it begins to take a dangerous toll on Charlotte. And who she was, is, and will become—her mark on this earth, her very existence—is in jeopardy of disappearing completely.

Charlotte will be forced to choose. Should she embrace her fate as a Forgotten, a fate that promises to rip her from the lives of those she loves forever? Or is she willing to fight against her destiny—no matter how dark the consequences?

I have to say that I went into this book with high hopes, hopes that did not live up to their expectation. I thought the plotline for the book was unique and very interesting, but it stopped there.

I felt like all of the characters were shallow and stereotypical: Harlin the bad boy who’s really soft at heart, Sarah the flirty best friend, Seth the popular guy/jerk at school. I just didn’t really care for or connect with any of them, not even Charlotte.

I also found it really tiresome to keep reading the same thing over and over every time Charlotte was struck with the Need. She’s compelled to move against her will, there is an intense burning in her shoulder, and so on and so forth, every single time. I think the author was just trying to get us to understand the pain Charlotte was going through, but instead it just caused me pain to keep reading it over and over. I think she could have abbreviated the process a little bit once we understood what it was like whenever the Need hit.

Overall this book just wasn’t my cup of tea.
Posted by Born Bookish at 6:59 AM