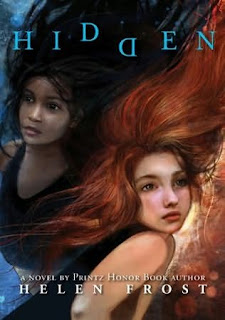 When Wren Abbott and Darra Monson are eight years old, Darra's father steals a minivan. He doesn't know that Wren is hiding in the back. The hours and days that follow change the lives of both girls. Darra is left with a question that only Wren can answer. Wren has questions, too.

Years later, in a chance encounter at camp, the girls face each other for the first time. They can finally learn the truth—that is, if they’re willing to reveal to each other the stories that they’ve hidden for so long. Told from alternating viewpoints, this novel-in-poems reveals the complexities of memory and the strength of a friendship that can overcome pain.

This idea of an unintentional kidnapping was very intriguing to me. Wren is in the backseat of her mom’s minivan when it gets stolen. Too afraid to say anything, Wren stays hidden until the car comes to a stop where she finds herself closed in a garage. While hidden in the garage Wren learns about the man who took her and his family, which includes a daughter the same age as herself. The two girls never speak, they never even see each other, but it is with her help that Wren is able to stay hidden long enough to come up with a plan and make her escape.

Years later the two girls end up in the same cabin at summer camp. At first they both try to ignore each other and the past, but the past soon becomes too big a burden that neither of them can ignore anymore.

Wren and Darra were both likable main characters who were easy to sympathize with. Both girls had been affected by this event in their pasts, but it had changed their lives in different ways. The main focus of the story was definitely character growth as we see these two girls overcome their painful past and start to forge a strong friendship that will continue into the future.

The thing I really liked was how creative the author was with this unique form of storytelling. The poems told from Darra’s view were created in a way that when you read the last word of all the long lines straight down the page from top to bottom it tells you more of the story. I thought this was a really unique and fun way to bring more depth to the story. Once I had finished the book, I saw the authors note on this and really enjoyed flipping back through the book to read these little bits on Darra’s life that give us a bit of a deeper look into her side of things, and how life changed for her as well as Wren.

Overall, this was a unique and enjoyable read. It’s the first of Helen Frost’s books that I’ve read but it certainly won’t be my last.
Posted by Born Bookish at 10:02 AM